The case of journalist Hajar Raissouni has prompted debate about social transformation in Morocco and the need for national regulations that reflect modern Morocco.

Rabat – Solidarity with Hajar Raisouni, the journalist jailed for “illegal abortion” and sex out of wedlock, is morphing into a broader call from civil society for more individual freedoms and human rights.

“In the beginning, we were just two, then 5, then 10, then 200… and now we are as many as 12,000 signatories,” said Sonia Terrab, a Moroccan writer turned activist. Late last month Terrab co-wrote a manifesto in defense of Raissouni.

Speaking at a conference in Casablanca on October 14, days after a Rabat court upheld the accusations against Raissouni, Terrab passionately talked about the role of social movements in the emergence of a new, rule of law-governed Morocco.

“The Outlaws,” the movement Terrab was formally presented at the Casablanca conference, according to Telquel, started off with a temporary mission as simple online advocacy for Raissouni. Weeks later, however, the group is developing into a movement for the defense of individual freedoms in Morocco.

According to the Moroccan writer, with the growing interest in their movement and the sustained debates among Moroccans about the state of individual freedoms and the rule of law,  they thought it would be good to turn the temporary advocacy group into a full-fledged civil society movement.

The group now aims to become an official participant in the necessary debates around social mores in Morocco, as well as the political reforms needed to usher the country in a new, much-hoped for an era of a consolidated democracy.

“When we saw that signatures were flying in and we reached 2000 signatories in the early days,” muted an optimist Terrab, we told ourselves, ‘Hey, this is really gaining ground’.” The movement “touched people,” she insisted, adding that the more interest and engagement they received from the public and thousands of Moroccans calling for things to change, “the more we told ourselves that we needed to shoulder more responsibility.”

Beyond the feeling of social responsibility, Terrab also appears to embrace the hope that, given that youth and women constitute the crushing majority of Morocco’s population, the country’s conservative, Islam-inspired legal norms are ultimately untenable.

But while change appears inevitable, she argued, it will take particular people and movements to bring about the necessary conditions to inspire the much-expected collective change.

“It is first and foremost a question of timing… But maybe I’m wrong,” she said with caution.

But that cautious line was immediately dented by her clear determination to continue fighting on behalf of Moroccan youth and women who she said have had enough of the way Moroccan society and authorities tend to limit the expression of individual freedoms. “I think that Moroccans, mostly the youth and women, have had enough. For their sake, we will not give up.”

But the Raissouni case also highlighted a sad, sober reality of online advocacy and armchair activism.

In the wake of the Raissouni controversy, while indignation and determination flew all over the place on various social media platforms in defense of Raissouni and Moroccan women in general, the rallies in solidarity with Raissouni struggled to gather the same momentum.

In most cases, the people who showed up at rallies and marches, where the message could have been given more urgency, and more transformative stridency, were a tiny fraction of the overflow of supportive voices that had shared messages of “change now” and “we stand with Raissouni” on online platforms.

Terrab is clear about the overarching goals.

While she described the overall sentiment as one of driving social and political change in Morocco, she was insistent on the need for Morocco’s individual freedoms and human rights advocates to not speak in dispersed, scattered voices.

“The aim of this conference is to centralize our voices and messages so that we are no longer dispersed,” said Terrab. But while doing so, she and her group are determined to follow up on the Raissouni case.

As the controversial case seems to have faded from the public eye weeks after the Rabat Court handed the journalist a one-year prison sentence, the group wants to bring the issue back to public prominence. They plan to publish a series of articles and newsletters in the coming weeks to resurrect the debate about releasing Raissouni. By doing so, the hope is to re-engage the country’s judicial authorities on the Raissouni case with the aim of adding fuel to a larger, and much-needed discussion on individual freedoms, human rights, and independent justice.

Terrab and her group are hardly the only ones calling for fundamental changes in both Morocco’s penal code and the larger, entrenched embrication between religion, culture, and whatever is left or becoming of Moroccan society or identity.

Supportive voices from all walks of life have generally made the point that many articles in the Moroccan penal code are obsolete and contrary to the spirit of the 2011 Constitution. Their central argument is that Morocco has considerably changed and national regulations need to reflect the social transformations the country has experienced.

But with the perception that Morocco’s Islamist ruling party is not poised to embrace the transformation the youth and women are calling for, it remains to be seen how effectively social justice warriors like “The Outlaws” will affect public policies and change the terms of Moroccan public debate. 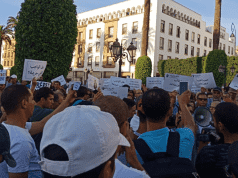