The suspects are linked to an international psychotropic drug trafficking network. 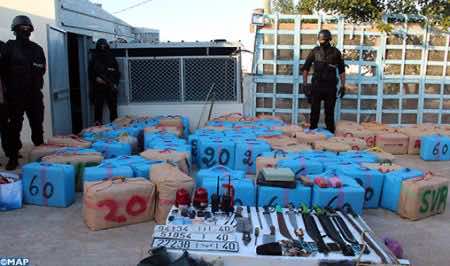 Police believe the suspects are linked to a psychotropic drug trafficking network in addition to the trafficking of cannabis resin.

A statement from the Directorate General of National Security (DGSN) said that police carried out the security operation on a farm in Doua Daidaat in the Gueznaia region, about 20 kilometers south of Tangier.

In addition to the platelets of cannabis resin, police also seized three inflatable boats and two wireless communication devices. The search operation led to the seizure of array of marine navigation equipment including torches, a compass, and 20 barrels of fuel.

Police discovered eight large trailers with cavities build for trafficking large quantities of drugs at the farm, along with four cars, falsified license plates, and weapons.

The defendants are in police custody, according to the DGSN statement.

Read also: From Fuel to Amphetamines: the Worrisome Evolution of Morocco’s Black Markets