With Morocco's Ministry of Education starting to lean away from the Francophone education system, Moroccan universities are looking to establish ties with English-speaking institutions.

Rabat – A Moroccan delegation of officials and university presidents is set to travel to London, United Kingdom, between January 20-24, to take part in the Education World Forum (EWF). The delegation is expected to seek partnerships with British institutions.

Four university presidents and four senior officials from the Ministry of Education will accompany the two ministers.

The visit, organized by the British Council and the British Embassy in Morocco, aims to strengthen strategic partnerships between the Moroccan and British education sectors.

Amzazi will address the EWF on Monday, January 20. The forum is the world’s largest annual gathering of education and skills ministers. This year’s forum is themed “One generation – what does it take to transform education?”

Amzazi is the first Minister of Education from the Maghreb region to address the EWF. He will share Morocco’s roadmap for education in a discussion on long term solutions for tackling learning poverty.

Leaders from global and international organizations, including UNESCO, the World Bank, and the Organization for Economic Co-operation and Development (OECD), along with more than 124 Education Ministers from around the world are taking part in the event.

On the sidelines of the EWF, the delegation is set to hold bilateral discussions with their British counterparts. The delegation will also establish a UK-Morocco Higher Education Commission, with the aim of forging new partnerships between Moroccan and British universities and research institutions.

The inaugural meeting of the commission is set to take place at the London Campus of Coventry University, on Wednesday, January 22.

The British members of the commission include the British Department for International Development (DFID), the British Council, Universities UK (a representative organization of British universities), and the UK’s Quality Assurance Agency (QAA).

The new joint commission’s main objective is to enhance collaboration between the two countries in the areas of research, academic exchange, technical assistance, and student mobility.

The British Council is also organizing a round table to explore opportunities to support the Moroccan ministry’s ambition to improve the teaching and learning of English within the national education system. The meeting will also focus on Technical and Vocational Education and Training (TVET).

The director of the British Council in Morocco expressed his hope for the visit to “strengthen ties, forge new partnerships, and ignite fresh collaborations between [the] two countries in a critical sector.”

“Evoking the words of one of Africa’s greatest leaders, Nelson Mandela, education remains the most powerful weapon we can use to change the world. Both our countries understand this,” concluded Reilly in a statement to the press. 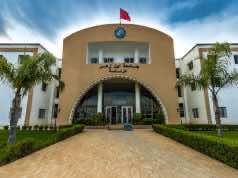