Rabat – The General Confederation of Moroccan Enterprises (CGEM) elected Chakib Alj as its president during an elective general assembly on Wednesday.

The new president will run the CGEM for three years. Alj has a chance to have his term doubled as the organization’s regulations allow for one renewal.

Commenting on his win, the newly-elected president said on Twitter, “ a big thank you to the companies, federations, and regions who have shown their confidence in us with their votes. There are many challenges and we are ready  to meet them together.”

Who is CGEM new chairman

The CGEM  president is active in several domains and agro-industries, including animal feed.

The businessman is also knowledgeable of plastic industry, hotels, and real estate.

A father to four children, The 54-year old entrepreneur was born in Casablanca and started his career in 1987, managing the Societe Nouvelle des Moulins du Maghreb.

The election session also served as a meeting to update the CGEM’s members on the contributions and finances of the employer’s confederation.

Amina Figuigui, deputy financial treasurer of the CGEM said that the number of CGEM members stood at 5268 at the end of 2019.

About 32% of the contributors are based in Casablanca.

The volume of contributions totaled MAD 41 million in 2019, representing an increase of 1.63%.

Ahead of his election, the CGEM was run by an acting president pending the appointment of a chairman.

Former Minister of Foreign Affairs Salaheddine Mezouar was running CGEM before he announced his resignation in October 2019.

Mezouar immediately withdrew from the organization following the condemnatory statement from the ministry. 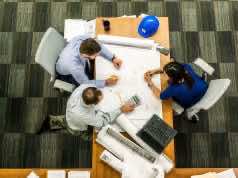