The new support desk at the Moroccan Agency for Investment and Export Development is part of a wider plan to welcome more Japanese investors.

Rabat – Morocco and Japan agreed yesterday to create a “Japan Desk” within the Moroccan Agency for Investment and Export Development (AMDIE).

The Japan Desk is part of the two countries’ bilateral relations and aims to support Japanese companies investing in Morocco.

“This desk will help with receiving all complaints, expectations, and requests for information from Japanese investors,” the Moroccan minister stated after the meeting.

“The top private employer in Morocco is Japanese,” Elalamy remarked.

However, he continued, the Moroccan-Japanese economic relationship has not yet reached its considerable potential.

For his part, Nakatani stressed that Japan attaches particular importance to cooperation with Morocco, given its link to Africa, Europe, and the Middle East.

Describing Moroccan-Japanese relations as excellent, the Japanese official expressed his country’s interest in further strengthening its ties and economic cooperation with the North African country.

Nakatani is on an official visit to Morocco with a joint delegation from the Japanese public and private sectors.

The visit reflects Japan’s commitment to continue efforts initiated at the 7th Summit of Heads of State and Government of the Tokyo International Conference on African Development (TICAD-VII) for the benefit of private investment in the African continent.

Business cooperation between the two countries is boosted by the presence of more than 71 Japanese companies in the North African country. The companies employ more than 40,000 Moroccans.

Morocco’s minister delegate to the Ministry of Foreign Affairs, Mohcine Jazouli, said on Monday that Japan can be Morocco’s first partner in Asia. 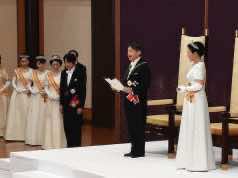