Many institutions in the province received new school buses to facilitate rural students’ access to education.

Ouarzazate – Authorities in Errachidia are making substantial efforts to combat school dropout rates in rural areas by increasing the fleet of school buses for several educational establishments in towns throughout the province.

Thanks to a partnership between the Provincial Directorate of Education and Training in Errachidia, the National Agency for the Development of Oasis and Argan Areas (ANDZOA) and the Provincial Council, several towns have received additional school transport buses.

The initiative is part of Morocco’s national efforts to reduce social and territorial disparities.

Most recently, Ezzaitoune and Mokhtar Soussi High Schools received new buses during a ceremony on March 11, according to Maghreb Agency Press (MAP).

The Wali of the Region of Draa-Tafilalet and Governor of the Province of Errachidia, Bouchâab Yahdih, presided over the ceremony.

The provision of school buses contributes significantly to reducing the school dropout rate in rural areas, especially given the isolation of some towns.

The number of school buses available to schools in the region has increased from 281 to 692 between 2016 and 2020, according to data from the Drâa-Tafilalet Regional Academy of Education and Training (AREF).

The number of beneficiaries also increased by 58% during the same period.

This initiative aims to facilitate access to schools through transportation buses. The new buses will also allow students from beneficiary schools to participate in provincial, regional, and national sporting events, along with school guidance forums and cultural trips.

The primary goal of the new school buses is to reduce the school dropout rate in Errachidia, as pupils from several towns are now able to reach their classrooms in normal conditions. Study: One in Five Moroccans Drops Out of School 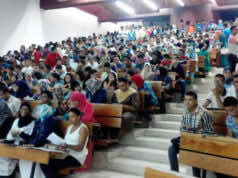 Half of Moroccan University Students Drop out Before Graduation