The destruction caused by the locusts, on top of severe flooding and the COVID-19 pandemic, is a deadly combination for impacted countries.

Rabat – Kenya, Ethiopia, and Somalia are expressing alarm as trillions of locusts infest their lands, marking the second wave of locust swarms this year.

Amid severe flooding and the COVID-19 pandemic, swarms are plaguing countries in East Africa, which expect to see a dramatic increase in poverty and hunger.

The first wave of locusts, which hit the continent in January this year, was the worst outbreak the countries have seen in 70 years. The locust swarms decimated approximately 240,000 hectares of land in the affected countries, destroying coffee, tea, and food crops.

Officials predict this second wave, which is the offspring of the first wave, will be much worse. The United Nations predicts that the swarms will be 20 times larger than those in January first–an invasion that will prove to be life-threatening if not urgently mitigated.

Locusts reproduce quickly and in abundance. One female locust lays approximately 80-158 eggs per pod and is able to reproduce at least three times during her three to five-month-long lifespan. Eggs take approximately 2 weeks to hatch.

COVID-19 travel restrictions and border closures are blocking tens of thousands of liters of pesticide from reaching areas desperate to prevent the third generation from hatching in June and July.

Locusts look similar to grasshoppers, but behave in very different ways. They are able to travel up 100 miles per day and can consume their body weight in food each day. A swarm of 40 million locusts can eat the same amount of food as more than 35,000 people in one day.

David Hughes from the UN Food and Agriculture Organization (FAO) told the BBC that the swarming “threatens the food supply of 23 million people. It is the number one food security issue in East Africa at the moment.”

Controlling the swarms as they simultaneously sweep across different regions throughout each country requires a large number of personnel and resources with which the struggling countries are not well-equipped. The UN recently appealed for $153 million to assist those countries impacted. 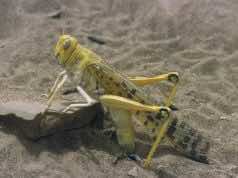