The two mosques have been solar powered since 2016 and represent Morocco’s vast potential for solar energy.

Greenpeace, the world’s largest independent environmental organization, named Morocco’s Koutoubia Mosque and As-Sounna Mosque as two of the most environmentally-friendly mosques in the Muslim world.

Koutoubia is the largest mosque in Marrakech and one of the ochre city’s most iconic landmarks. The Islamic architectural marvel dates back to the late 12th century and boasts a minaret 77 meters tall that looms over Jemaa el-Fna.

Upon conquering the Almoravids and claiming Marrakech, Almohad caliph Abd al-Mu’min established the mosque around 1150. Almohad caliph Moulay Yacoub finalized its minaret in 1195, solidifying Koutoubia as a prime example of Alohad and Moroccan mosque architecture.

The name Koutoubia translates to “booksellers” in English and reflects the bookselling trade in the nearby souk. During the colonial period, the French used the mosque as a central landmark while developing a network of roads in Marrakech.

The mosque is known now for its intricate geometric motifs, spire, metal orbs, and nearby rose garden, but ordinary passersby may not notice that the structure is equipped with state-of-the-art solar panels that power 100% of the mosque’s electricity use.

Koutoubia mosque installed the solar panels in November 2016, along with energy-efficient LED lights and solar water heaters, as part of Morocco’s “green mosque” initiative to orient thousands of state-owned mosques towards renewable energy. As a net energy importer, Morocco has been working for years to capitalize on locally-sourced sustainable energy to power its cities.

Rabat’s As-Sounna Mosque may appear to be engulfed in an endless cloud of reconstruction, but it is actually a prime example of the fruits of Morocco’s green mosque initiative. The mosque received a $30,000 energy-efficient facelift in 2016, and its rooftop solar panels have allowed it to slash energy costs by over 80% and save approximately $7,000 per year.

One of the largest mosques in Morocco and a major historical monument in Rabat, As-Sounna is a favorite of the royal family and often hosts elite religious gatherings. The Alaouite Sultan Moulay Mohammed ben Abdallah completed the mosque in 1785, and the ruling dynasty renovated the structure in the 19th century. On King Hassan II’s 40th birthday in 1969, the mosque underwent further renovations, including the stone-by-stone reconstruction of its minaret.

Spanning more than 3,000 hectares, the complex’s Noor I, II, and III plants produce enough electricity to power a city the size of Prague.

The curved mirrors of the Noor solar panels concentrate radiation to heat tubes of fluid which are pumped into a power unit for storage until nightfall. The warmth of the mirrors melts a cylinder full of salt that stays hot enough to provide up to three hours of power after dark.

The Moroccan Agency for Sustainable Energy (MASEN) is expanding the country’s solar capacity. MASEN launched a tender in February to pre-qualify private developers for the construction of a new 400-megawatt solar power plant, the first phase of the Noor PV II project that is set to include photovoltaic systems at nine different locations in Morocco.

Keen to reduce its reliance on imported fossil fuels, which cover approximately 97% of the country’s energy demands, Morocco hopes to have its consumption of renewable energies exceed that of fossil fuels by 2030. 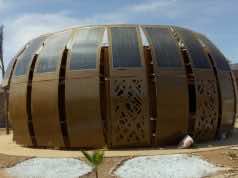