The repatriation flights will be carried out throughout the month of June at a frequency of two to three flights weekly. 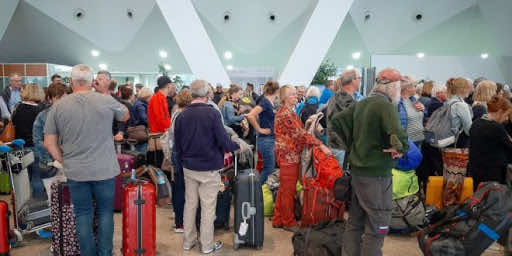 Rabat – The Belgian Embassy in Rabat announced on May 26 that it will resume repatriation operations for nationals stranded in Morocco on Tuesday, June 2.

The two countries have already facilitated a number of repatriation flights for citizens, including those with dual Moroccan-Belgian nationality, who have filed a request with the Belgian authorities to be repatriated.

Belgian press agency Belga said that the majority of the binationals who have registered repatriation requests are stranded in northern Morocco, adding that the embassy will secure bus transportation from major cities in the North to Casablanca’s Mohammed V International Airport.

Belgian authorities previously faced criticism for reportedly making a “distinction” between binationals and Belgian nationals in considering repatriation requests. Belgian Minister of Foreign Affairs Philippe Goffin refuted the claims in April by emphasizing that Belgian authorities approve repatriation requests strictly on the basis of need, not accounting for a difference between nationals and binationals.

“There is obviously no ambiguity,” he said, adding that authorities would consider requests equally from those stranded in Morocco who are “solely Belgian or have two nationalities.”

The embassy said on its Facebook page that the TUI Fly airline will secure the repatriation flights, which will continue throughout the month of June at a frequency of two to three flights per week. It added that the airline has started contacting the concerned stranded nationals, who are mainly in the Oriental region, for Tuesday’s flight.

The embassy called on its citizens to not reach out to the company on their own initiative as the company has a list of approved travelers who it will contact directly.

Morocco closed its airspace indefinitely on March 15. Many hope the ban will lift at the end of the state of health emergency, now set to expire June 10. Despite the ban, Morocco has authorized special repatriation flights for Belgians and other tourists, professionals, and students from different nationalities.

The Belgian authorities have managed to organize seven flights from Morocco, since the beginning of May, enabling the repatriation of 3,050 people.

Approximately 4,500 Belgians and binationals contacted the embassy for their repatriation, according to rtbf.be.

For further information on the procedure, the embassy invites its citizens to visit the following link: https://morocco.diplomatie.belgium.be/fr/vols-de-tui-fly.