Southern Morocco will witness heavy rainfall of an “orange” level.

Rabat – The National Directorate of Meteorology (DMN) forecasts locally heavy thunderstorms of orange level for several provinces over the weekend.

Rainfall will hit the provinces of Boujdour, Es-Semara, Assa-Zag, Tata, and the interior provinces of Laayoune, Tarfaya, Tan-Tan, and Guelmim from 3 p.m. on Friday until 9 a.m. on Saturday.

The thunderstorms will be accompanied by strong gusts of wind.

Fairly strong wind will hit the North and Central Atlantic plains and the Southeast region on Saturday afternoon.

The rainfall could be beneficial in the south of the country, where drought affected agricultural yields due to lack of rain this season.

The Ministry of Agriculture announced earlier this week that it invested $36 million to compensate farmers affected by drought over the past few months.

During a session of the House of Representatives on June 1, Minister of Agriculture Aziz Akhannouch said the ministry launched the initiative to assist Moroccan farmers on an “exceptional basis” after having assessed the effects of drought since March 14.

“The payment of these funds started in mid-April instead of July in order to mitigate the impact of the rainfall deficit on farmers,” Akhannouch said. 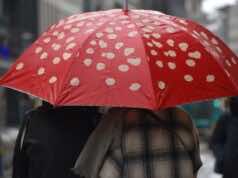