Madagascar is one of more than 15 African countries that have benefited from Moroccan-made medical supplies amid the COVID-19 pandemic. Rabat – A shipment of Moroccan medical aid intended to support Madagascar in its fight against the COVID-19 pandemic arrived at Antananarivo International Airport on June 23.

The aid is part of an initiative King Mohammed VI launched to provide support for fellow African states in their efforts against the pandemic.

The Moroccan Ambassador to Madagascar, Mohamed Benjilani, also attended the ceremony, along with members from the Malagasy section of the Mohammed VI Foundation of African Ulemas and members from the association of former Malagasy students in Morocco.

Speaking at the ceremony, the Malagasy FM expressed the gratitude of his country to King Mohammed VI for the important act of solidarity, emphasizing that the Moroccan donation reflects the exemplary relations between the two countries.

“This donation comes at the right time, at a time when the country is in the midst of the fight against the spread of COVID-19,” said Djacoba, reiterating his thanks for Morocco, which “has always stood alongside Madagascar.”

Meanwhile, the Moroccan ambassador to Madagascar said the donation “translates, in the most tangible way, King Mohammed VI’s spirit of solidarity towards African countries.”

Benjilani stressed that Morocco has always stood behind Madagascar, especially when the island country went through difficult periods, recalling Morocco’s support to the southern African state when it was hit by the plague epidemic and by cyclones.

In 2017, Morocco sent 34 tons of medicine and medical gear to Madagascar to help the country fight against a plague outbreak. In 2018, the kingdom sent humanitarian aid made up of tents, blankets, and basic foodstuffs after tropical cyclone Ava hit the island state.

The Moroccan assistance is also an expression of South-South solidarity and the Moroccan pan-African spirit, Benjilani added.

However, more African states benefited from the aid than initially planned, with the addition of countries such as Angola and Madagascar to the list. 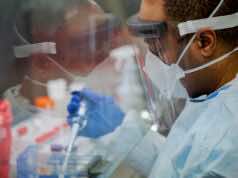