According to the minister of industry, Morocco’s ambitious plan would turn the country into a global power in various industrial sectors such as the automotive industry.

“We import MAD 43 billion of products that could be made in Morocco in the upcoming years,” Elalamy said during a parliamentary session at the House of Representatives on July 6.

According to the minister, with an investment of MAD 22 billion ($2.28 billion), Moroccan industry can meet the domestic demand for some imported products, significantly reducing Morocco’s foreign expenses.

“We have business plans and we know precisely what we need to do to stop importing [the products]. We will work on this in the upcoming weeks and we will launch the project, addressing it to Moroccan youth and investors,” Elalamy said.

During the parliamentary session, the minister discussed his department’s post-COVID-19 strategy, emphasizing that while the industry sector is still recovering, it has many opportunities to grasp.

At the end of April, Moroccan industry recorded a 30% decrease in revenue compared to the same period in 2019. By the end of June, the annual decline was at 20%.

“The impacts of the [COVID-19] crisis are very significant, but we hope that, in the near future, opportunities will allow us to rebound,” Elalamy said.

According to him, new opportunities have emerged thanks to the mutating international economic context amid the COVID-19 pandemic.

“During this crisis, all countries became aware of the particular trade relation they have with China. A majority of products in the health sector, such as medical masks, ventilators, and other products are imported from China, so many countries are thinking about diversifying their trade relations and not have China as a sole partner,” Elalamy explained.

A second mutation, according to the minister, is the increasing cost of labor in China, which would push businesses to look for workforce elsewhere.

“The competitiveness of China is currently in decline. The minimum salary in China, which once was $100, is today at $700 and will reach $1,500,” Elalamy predicted.

Finally, the third mutation is the growing global awareness about climate change and the transition towards clean energies.

“Several countries in Europe have taken the decision to put in place a new tax on imported products—a carbon tax. It is applied to all products manufactured with energies that are not renewable,” Elalamy said.

“Thankfully, we have renewable energies in Morocco. We are working on an important project that will allow the Moroccan industry to use renewable energy in the future to improve its competitiveness,” he continued.

The Moroccan minister gave the example of the automotive industry to illustrate Morocco’s efforts to improve its international competitiveness.

“Today, there are only two countries that have better competitiveness [in the automotive industry] than Morocco. They are China and India. We have overtaken Eastern Europe, Turkey, and other countries, and only China and India are left,” he said.

“We have a strategy that would allow Morocco, in the upcoming two years, to have the same level of competitiveness as India, through utilizing renewable energy and bypassing carbon taxes,” Elalamy concluded. 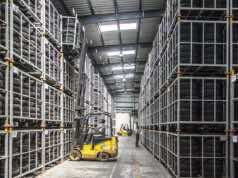