Egyptian celebrity Omar Samra regarded the fight for women’s rights as “the most important movement of our time.”

Rabat – Worldwide, women persist in their battle for equal rights, safety, and respect. In Egypt, a movement for justice is pushing gender-based discrimination and violence to media headlines and the forefront of conversations. Numerous women coming forward to allege Egyptian university student Ahmed Bassam Zaki of sexual assault and harassment have put calls for women’s equality, justice, and an absolute shift in ideologies in the spotlight.

According to the Egyptian Public Prosecution’s statement on July 6, Zaki is being accused of sexual misconduct including assaulting multiple women — at least one under the age of 18. He is also accused of threatening and blackmailing women, violating the sanctity of their private lives, and harassment through telecommunications and social media.

Following the report, dozens of women have come forward to confess being raped, sexually assaulted, and harassed by Zaki.

“He raped me and after that I suffered from hemorrhoids and crack in my lower bones. I couldn’t even walk,” read the testimony of a woman who claims she was raped by Zaki. The testimony, along with dozens of others, was shared over an Instagram page called “AssaultPolice.” The page, which already has 160 thousand followers, was created alongside a website aimed to ensure that the voices of Zaki’s alleged victims “never die.”

Zaki admitted to blackmailing and intimidating six women, however, he denied further claims made against him over the past week. The attorney general responsible for the case has ordered a 15-day arrest as the court undertakes an investigation.

The testimonies of those who claim abuse by Ahmed Bassam Zaki have done more than mount serious concern over the victims’ allegations and particular situations. The extreme case of serial assaults and harassment has inspired both women and men to speak out against cultures of silence and shame that plague women’s daily lives and damage their wellbeing.

As well, it has inspired many to vocalize their unwavering distress over the ways in which patriarchal and misogynistic norms have been permitted to play out — oftentimes excused by sentiments such as “boys will be boys,” humor, or unfair ideals that restrict women’s freedoms.

Influencers and celebrities use their platforms to speak out in support of women, urging consent, education, and respect.

“The problem is with men, not women. We need to change. We need to be aware that what we’re doing is wrong. It’s not a joke, it’s not funny. This is a crime, starting from the smallest acts on the street to the worst of it, rape or otherwise,” said Omar Samra, a motivational speaker and astronaut candidate who is well known for being the first Egyptian to climb the world’s Seven Summits. Samra urged his audience to understand that when a woman says “no,” her decision must be respected and “that is the instant when it [any form of sexual advances] must stop.”

Verbal harassment, although seemingly menial compared to physical assault, is threatening and can cause damaging psychological impact. Research shows that women who experience street harassment, from cat calls to stalking or groping, are at an increased risk of suffering from depression and anxiety.

The feeling of being constantly preyed upon while navigating public spaces takes a toll and can lead to chronic stress and fears of simply walking outside. Samra adds that verbal communication also comes with limitations. He noted that anyone making someone feel uncomfortable with their words “has crossed a boundary.”

‘The most important movement of our time’

Samra reposted the video on his own Instagram page and wrote, “This may be the most important movement of our time.”

Renowned Egyptian actress Engy Wegdan criticized the ways in which families instill shame in their daughters and teach them to be silent about their experiences regarding harassment and assault in order to protect their reputations. “It’s the other way around. You ruin her reputation more by not standing up for her,” she declared.

It is not only families that invoke discomfort, humiliation, and anxiety, causing women to stay silent about their experiences and allowing men to perpetually abuse them. Society, including judicial systems, are often guilty of victim blaming women. Rather than addressing the actions of men, people often choose to address the whereabouts, clothing, or choices of women.

Many are calling for an urgent need to turn the tables and shift the dialogue from taking initiatives to protect girls and women to taking measures to educate boys and men about mutual consent and respecting boundaries.

Comedian and content creator Yahia Elsady said, “Enough with the question, ‘why was she there?’” He stressed, “That’s the worst question in the world.” Elsady went on to stand up for women’s freedoms and equal rights saying, “If she did go, she’s free to go where she pleases. If she says no, then it’s a no. Even dogs understand the word ‘no.’”

A movement beyond Egypt’s borders

“As a woman, your words are not enough,” were the words told to me after I denied a neighbor’s sexual advances in Rabat in May.

According to this man, the multiple and direct “no’s” that I firmly said, along with my pronounced air of discomfort and recoiling, were nothing more than products of my own misjudgement for what it is that I actually desired and needed.

My personal experience in Morocco and the mentality of my neighbor is far from siloed. Women worldwide suffer from the blatant disrespect and violence surrounding women’s choice, safety, and wellbeing.

A 2019 national survey on the prevalence of violence against women only partially addresses Morocco’s paralleling problem with worldwide women’s woes. The report shows that nearly 55% of Moroccan women experience some form of gender-based violence. While the statistic is already staggering, many believe that the number of women who experience harassment, assault, or other forms of violence is watered down by women’s silence and non-reporting.

“Silence is one of the factors that aggravate the tragedy of abused women, noting that the proportion of women who have spoken to a person or at an institution is 28.2%,” said Morocco’s Minister of Family, Solidarity, Equality, and Social Development Bassima Hakkaoui last May.

Morocco’s laws that are meant to protect women against violence have been criticized by international human rights lawyers for omitting mechanisms that would protect victims in the case of reporting, investigation, and prosecution.

In addition, the problems of believing that “women’s words are not enough” or that women are undeserving of their human rights remain of utmost concern.

To Elsady’s point, the word “no” uttered from anyone denying consent appears to be largely misunderstood or altogether disregarded. While it may come as a surprise to some, words are enough in such instances and in fact, both women and men have full agency and control over deciding what it is that they do or do not want. When it comes down to intimate relationships, consent is at the core of respect, human rights, health, and safety.

Consent occurs when one person voluntarily agrees to engage in an activity or conversation with another person. Sex, for example, without consent, is rape.

The website “Consent is Everything,” backed by Oxford University, multiple UK-based crisis centers, and local law enforcement officials, is dedicated to teaching consent. The resource outlines “how to get consent” in order to avoid sexual violence.

“The person seeking or initiating sex is responsible for getting consent. Ask yourself if the other person is capable of giving consent. If they are on drugs or too drunk, asleep, or unconscious they cannot choose,” the website reads. It adds that people living with disabilities such as mental health problems or head injuries may not have the capacity to give consent.

Importantly, it includes that someone initiating sex should confirm consent non-verbally as well. If a person’s body language indicates discomfort, stress, or unhappiness, stop and ask if they are okay.

“Check with them each time you start a new type of sexual activity. Check with them on each occasion you start any sexual conduct.” In other words, if a person says “yes” one day, it does not mean you can pass on consent the next time. 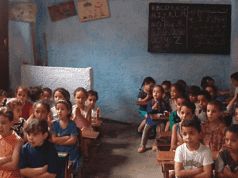