Rabat – Casablanca residents have expressed their astonishment and disappointment with the covering of a well-known painting by Italian artist Francesco Camillo Giogin, also known as Millo.

The artwork, which was only one-year old,  was replaced by a white painting.

Photos of the removed artwork instantly went viral on social networks, with many denouncing what they see

Photos of the removed artwork instantly went viral on social networks, with many denouncing what they see as a “disappointment” for the city’s increasingly street art-conscious youth.

Just got this pic from a fan in Casablanca…?

Citizens shared the photos of the removed mural on Facebook, expressing astonishment and strongly condemnatory comments against the decision.

For his part, Millo expressed his disappointment at the covering of the painting. He also  appeared to appreciate the public’s disapproval of the removal and the messages  of support he has since received.

“Just got this pic from a fan in Casablanca…,” the artist wrote using a sad emoji.

He later shared photos of his artwork covered by white painting on Facebook.

It is still unknown who gave the order to remove the mural.

The controversial decision comes as street art is gathering steam among Moroccans.

Since at least 2015, grafitis and other forms of “dop,” urban art forms have become a cherished vehicle of self-expression and subversive creativity among young Moroccan artists.

In 2017, American website Artsy featured Morocco’s capital, Rabat, as “one of the best cities to be a street artist today.”

“In Morocco’s major cities, art has been accessible on the street and in public spaces since times of antiquity—intricately patterned Zillij tiles, meticulously carved woodwork, and the flowing characters of Arabic calligraphy adorn the mosques and medinas of Rabat, Marrakech, Fez, and Casablanca,” the website said. 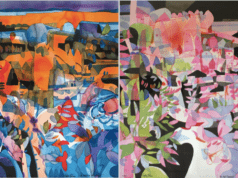