The BCIJ seized materials in several operations in different cities during the raid on a five-member terror cell. 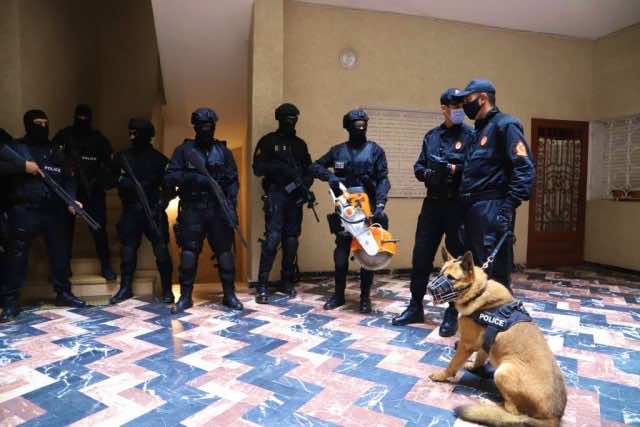 Rabat – The General Prosecutor at the Court of Appeals in Rabat confirmed that the materials Morocco’s anti-terror bureau personnel seized on September 10 are used in the manufacture of explosive devices.

In a statement, the prosecutor said scientific expertise found out that the materials are sensitive and could explode with simple exposure to heat.

The Central Bureau of Judicial Investigation (BCIJ) arrested five suspects for their affiliation with ISIS on September 10 in Tangier and Tiflet, Skhirat, and Temara near Rabat.

The public prosecutor said that technical and scientific expertise determined a complete match between the chemicals, liquid materials, gas bottles, and light bulbs seized in the different inspection places.

The prosecutor’s statement is part of the ongoing investigation into the terror suspects.

It is also within the framework of “enlightening public opinion regarding issues that capture interest, and based on the constitutional right related to the right to information,” the press release added.

In line with the investigation, Morocco’s BCIJ seized more suspicious equipment in Temara.

BCIJ personnel found explosive and flammable materials at the garage of an apartment building where the main suspect’s sister lives.

The wife of the main suspect provided testimonies, leading security services to the location of the suspicious substances.

Head of the BCIJ Abdelhak Khiame said the suspects had targets, seeking to undermine the security of the country.

He said Morocco avoided a bloodbath with the arrests.

Al Khiame recalled that two of the suspects, including the main defendant, showed “violent resistance” during arrests.

The “emir” or the leader of the suspects injured a BCIJ member with a sharp tool.

The US State Department in its 2019 annual Country Report on Terrorism said Morocco has a “comprehensive” counterterrorism approach.

The report said that Morocco continues to face “sporadic” terror threats from ISIS-inspired cells and other terror organizations.

The State Department also recalled cooperation between security units in the US and Morocco to combat the international scourge of terrorism.