The inauguration of Zambia’s consulate general on Tuesday follows the opening of its embassy in Rabat on October 24.

Rabat – By inaugurating its consulate general in the southern city of Laayoune, Zambia reiterates its support for Morocco’s sovereignty over Western Sahara, announced the Secretary General of the Zambian Ministry of Foreign Affairs, Chalwe Lombe.

During a joint press briefing following the inauguration ceremony on Tuesday, the Zambian official stressed his country’s “abiding” position regarding Morocco’s right to territorial integrity and sovereignty over its southern provinces.

Lombe considered the diplomatic move a “sovereign act of support and solidarity” towards Morocco on the question of Western Sahara. The official labeled Morocco as “a true friend of Zambia.”

Zambia’s consulate is the eighth African diplomatic representation to open in the province of Laayoune in one year. It is the 15th African consulate in the southern provinces as a whole, as seven others have opened in the city of Dakhla.

The recent inaugurations are part of an expanding recognition within the African continent of Morocco’s territorial integrity.

In 2016, Zambia withdrew its recognition of the self-proclaimed Sahrawi Arab Democratic Republic (SADR), consolidating pro-Morocco momentum on the Western Sahara dispute and boosting the growing ties between the two African nations.

In 2017, Zambia’s former FM, Harry Kalaba, said that his country supports “the efforts of the United Nations to help the parties find a long-lasting solution to the conflict over the Western Sahara.”

The growing ties between Morocco and Zambia

The inauguration of Zambia’s consulate general came only three days after the sub-Saharan state opened its embassy in Morocco’s capital.

Commenting on the two diplomatic offices, Lombe said that they will also help strengthen bilateral ties between Morocco and Zambia on the “economic, political, and human levels.”

The Zambian diplomat welcomed Morocco’s support for the training of Zambian students who benefit from scholarships in Morocco.

He went on to recall King Mohammed VI’s 2017 visit to his country.

The productive visit led to the signing of 19 agreements in various fields, including diplomatic consultations, economics, science, technology, education, mining, finance, and tourism, among others, with the aim to increase commercial and cultural exchanges.

The medical shipments included millions of protective face masks, 900,000 visors, 600,000 hygiene caps, 60,000 medical gowns, and tens of thousands of liters of hydroalcoholic gels, along with 75,000 boxes of chloroquine and 15,000 boxes of azithromycin.

International organizations welcomed the royal initiative, including the World Health Organization (WHO),and the Food and Agriculture Organization of the United Nations (FAO). 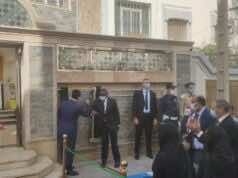