Rabat – Morocco’s Federation of Health Industries (FMIS) and Hungary’s Association of Medical Manufacturers signed on Tuesday a Memorandum of Understanding (MoU) to improve cooperation in the medical industry.

President of FMIS Karim Haj Riffi and his Hungarian counterpart Gabriella Aj signed the agreement during a virtual ceremony. The event also saw the presence of Hungary’s Ambassador to Rabat Miklos Tromler.

The agreement aims to bring together medical industry stakeholders from both countries to facilitate cooperation through the exchange of expertise and technologies.

The Hungarian ambassador told Morocco’s state media the cooperation MoU proves the “excellence” of relations between Morocco and Hungary, and gives added value to both medical industries.

The diplomat also recalled Morocco’s experience in the medical industry. He expressed a desire to see cooperation improve in related health sectors, in particular regarding mobile hospitals, new laboratory technologies, and new dental technologies in which Hungary “excels.”

Morocco has notable experience with mobile and field hospitals, domestically and internationally.

During the COVID-19 pandemic, Morocco’s Royal Armed Forces and the Ministry of Health built several field hospitals to alleviate pressure on other hospitals hosting COVID-19 patients. These facilities served patients in several provinces including Casablanca, Marrakech, and El Jadida, among others.

Following the August 4 explosion in the Beirut port, King Mohammed VI ordered the establishment of a field hospital for victims of the blast.

The Moroccan Beirut field hospital started operations on August 10 and sustained them for over two months, until October 24.

The president of Morocco’s FMIS said that today’s agreement will be the first milestone in a “fruitful cooperation” between Morocco and Hungary.

The Moroccan official noted that Hungary has conducted notable research in the field and has extensive experience in medical manufacturing and the production of medical equipment and devices. 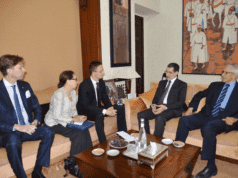