After war broke out in Syria in 2011, Syrians fleeing the country flooded refugee camps in the region, with Jordan’s Zaatari camp becoming the largest. 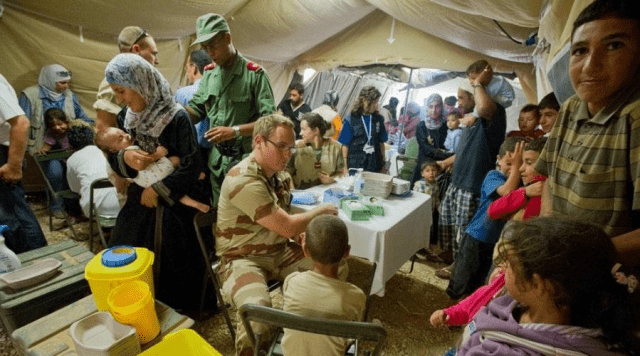 The humanitarian mission by Morocco’s Royal Armed Forces (FAR) began in August 2012 under the instructions of King Mohammed VI, who acts as the Supreme Chief and Chief of the General Staff of the Armed Forces.

Two months after Morocco established the field hospital in the Zaatari refugee camp, King Mohammed VI and Prince Moulay Rachid visited 1erHMCC to hand over two donations for the benefit of Syrian refugees from the Mohammed V Foundation for Solidarity and the Moroccan Agency for International Cooperation.

Five years later, the refugee camp saw welcomed a commission of Moroccan parliamentarians and their counterparts from the Parliamentary Assembly of the Mediterranean (APM).

Throughout its eight-year mission, Morocco’s field hospital in Zaatari conducted more than 1.04 million medical consultations for Syrian refugees, including 346,606 women, 284,711 men, and 413,142 children.

The military hospital also recorded 489,395 operations in various specialties, 312,189 in surgical specialties, and 220,889 additional examinations, namely in biology, radiology, ultrasound, and electrocardiography, according to the same source.

As of September 4, the Zaatari camp is home to 77,771 Syrian refugees, according to the UN Refugee Agency (UNHCR).

According to Oxfam, the camp once hosted 150,000 Syrian refugees at its peak and became Jordan’s fourth-largest city.