Rabat – Morocco’s Permanent Representative in Geneva Omar Zniber denounced, Wednesday, Algeria and Polisario’s attempts to mislead the international community, and the UN Office of the High Commissioner of Human Rights (OHCHR) in particular, about an alleged “special situation” of human rights in Western Sahara.

Speaking at a virtual meeting that High Commissioner for Human Rights Michelle Bachelet hosted, with the Support Group for Morocco’s territorial integrity at the Human Rights Council (HRC), the diplomat said that “the hostile grouping to the Kingdom, led by Algeria, has neither legitimacy nor credibility to address human rights, let alone the issue of the Moroccan Sahara.”

“The vast majority of its members hold sad records in this area and their massive violations are constantly denounced and condemned by the reports of the High Commissioner and by the mechanisms of the HRC,” he noted.

Zniber criticized the behavior of Algeria’s representative in Geneva who he says addresses HRC delegations with intimidation and violence. This exposes his country’s involvement in propaganda aimed at distorting the realities on the ground and diverting attention from the deteriorating situation of political and civil rights in Algeria, he added.

This behavior also exposes Algeria’s isolation in the face of the positive dynamic that US recognition of Morocco’s sovereignty over its southern provinces has generated, the diplomat said.

The Moroccan diplomat warned against attempts to politicize and instrumentalize the Office of the High Commissioner through false allegations from NGOs that have “no credibility and are on the Algerian government’s payroll.”

Zniber reminded the High Commissioner of the persistence of serious human rights violations in the Tindouf camps on Algeria’s soil, which assumes full legal and moral responsibility before the international community.

Zniber also highlighted Morocco’s dialogue and cooperation with the Office of the High Commissioner for Human Rights on various issues of interest to the international community and reiterated the Kingdom’s willingness to maintain this dialogue.

Several ambassadors and permanent representatives also took the floor to affirm their support for Morocco and reiterate their warnings against politicizing the Sahara issue within the HRC. 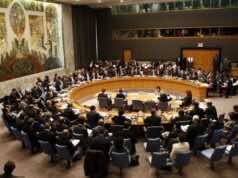