Despite official promises to forge ahead with a reform programme, some Moroccans are sceptical of the authorities' approach in view of the widespread use of force against protesting youths. 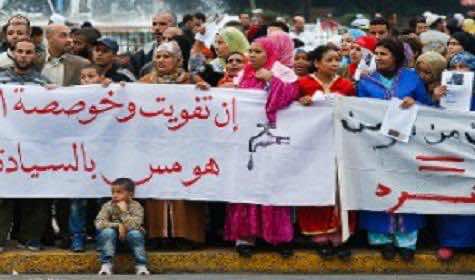 Rabat – “Those who fear an undermining of the announced reforms should be reassured: it’s a strategic and irreversible choice,” Communications Minister Khalid Naciri told AFP.

“Morocco will not step backwards and will press right on through with the commitments that have been made at the highest level of state,” he added, referring to a speech made by King Mohammed VI on March 9.

In his broadcast address, the king of the north African country announced a series of major constitutional reforms, providing notably for the separation of powers among the executive, the judiciary and the legislative, along with increased powers for the prime minister.

At the time, the speech was widely hailed, but since then critics have begun to speak out against the use of force by police, particularly against youths of the Movement of February 20, who call for radical democratic change in Morocco.

“The risk of a new tightening of the screws of security cannot be ruled out because people hostile to change are still very present” in the corridors of power, said Lahcen Daoudi, the chairman of the parliamentary group of the Islamist opposition Justice and Development Party (PJD).

“The authorities need to show these young people that they have heard their message and are taking it into consideration. By repressing them, they seem to be giving the opposite impression,” Daoudi added.

At the weekend, police broke up demonstrations by several hundred members of the Movement of February 20, named for the day when thousands first took to the streets calling for change. Dozens of people were injured on Sunday in the northern port of Tangiers.

Economist Fouad Abdelmoumni, who described himself as a “sympathiser” with the movement, warned that the “disproportionate use of force against young Moroccans appears to suggest that recent reforms carried out by Moroccan officials are not credible.

“In using the repressive apparatus of state to crack down on a peaceful movement, Morocco is showing once again that it is no exception compared with other Arab regimes,” Abdelmoumni said.

To justify the use of force against young demonstrators, the authorities regularly allege involvement in protests by Islamist movements such as Justice and Charity, as well as political forces on the left.

Naciri said that Justice and Charity, which is one of the biggest movements in Morocco, is using demonstrations for greater democracy “to serve its own agenda”.

Justice and Charity is officially banned, but its activities are often tolerated by the authorities. Contacted by AFP, the movement’s spokesman Fathallah Arsalane argued that “the state should answer the political and social demands of Moroccan society rather than coming down on our movement.”