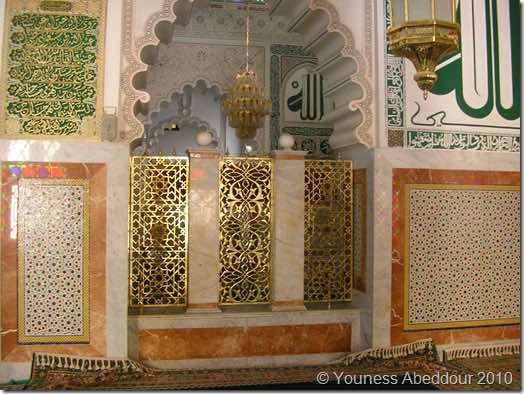 Fez – Tourism is one of the fastest and largest growing sectors of the Moroccan economy. Therefore, tourism contributes largely in the development of the country. It is this reason that motivates Morocco to diversify the forms of Tourism to meet the different needs of the tourist. Religious tourism is one of the very aspects of tourism that has been well-taken care of in Morocco. Thus, this article will be on Religious Tourism focusing on Sufi-Tourism in Morocco and how it impacts tourism sector. To begin with, Religious Tourism can be understood as a ‘mission of faith,’ a religiously or spiritually motivated travel to explore religious locations such as tombs of saints, great scholars and righteous people.

The definition of Sufism

Sufism, as defined by Sufi people, is a spiritual journey to discovering one’s inner Self which leads to knowing God, arguing that when you know yourself you know the Creator. According to Faouzi Skali[1], “knowing oneself is divine knowledge,”[2] he adds that “we have to go through these different steps by having a wider and a larger awareness of what we are, really, in the reality.”[3] Sufism allows for the expression of spirituality; it is a process that makes one “learn how to follow this very deep path inside ourselves.“[4] Its main focus is to bring individuals closer to God to embrace his presence in the everyday life.

Hamid Mahmoud Ali Ismail in his enlightening book Hada howa Nour: lamaHat ‘an tassawof (This is the Light: Hints on Sufism) defines Sufism as follows:

Sufism is a spiritual message and a religious thought and a disciplinary process, its pillar is purifying the heart from life’s materialism and impurities, and its essence is connecting the human with the great Creator.[5](My translation)

It is claimed that Sufism is derived from the Greek word ‘Sofia’ which means wisdom. But this is refuted by the Sufi scholars.[6] Mahmoud Ali Ismail argues that Sufism is based on the Quran and on a strict emulation of the Prophet Mohammed’s suna (the prophet’s life). So, according to him, there is no room to claim it is a bid’a (heresy). In his book he gives a detailed process of how to become a Sufi, starting by repentance and finishing by zikr(meditation).

Sufism is a universal group, “in the sense that it is ‘available’ or ‘belonging’ to all people, not just those of a particular ethnic or religious background.”[7]Sufism is available to all, be it Muslims or non-Muslims; means that it is joined and embraced by a wider range of people, from different ethnicities and religious backgrounds. When I raised this point, however, to a Tijani Sufi he commented that it is only for pure Muslims and Muslim converts.

Interestingly, there are many Sufi brotherhoods in Morocco including: Tijaniya, Darqawiya, Zitouniya, Mchichiya, etc. each of which has its own practices and saints and also festivals and Moussems.

The Impact of Sufism on Tourism in Morocco

Importantly, Sufism in Morocco is distinguished from other countries, which makes it a desired destination for tourists who are looking for spiritual journeys. Equally important, “religious tourism in Morocco has picked up steam over the past few years thanks to a galaxy of shrines and mausoleums that draw hundreds of thousands of committed followers yearlong.”[8] This is what interests and attracts tourists; they come to Morocco to live and experience the process of purification and an inner journey through different practices, including visiting Zawiyas and shrines, reciting and singing religious hymns. Some agencies organize Sufi tours, which include visits to holy places of Sufis, meetings with sheikhs (chiefs) of Sufi schools, talks and lectures on Sufism as well as learning, passing through some stages of zikr (meditation) and living in the Sufi center.[9]

Some tourists tend to be curious to know about Sufism and learn about “this mysterious side of the Islam religion,” for this reason there is a Sufi Culture Festival in Fez that introduces them to “the Sufi heritage, rituals and beliefs. It is a festival where dance and music fills the evening air and where art and workshops spread the Sufi message of love and tolerance.”[10] It is events like these, be it conferences or festivals, which encourage tourists to come. Another kind of tourist’s attraction is Aissaouas as a form of Sufi dance and religious singing; Ericc Geoffroy in his book Introduction to Sufism states that “In North Africa (…) the Aissaouas (of the popular ‘Isawiyaa brotherhood), who are known for the possession rites and self-mutilation, are exhibited quite officially so as to attract customers.”[11]

Fez Festival of World Sacred Music has become an international event; people come from all over the world to attend. Based on the pluralism of Moroccan Sufism, the festival has attracted big international stars. While the big names are a draw, equally fascinating are the more intimate concerts held by Morocco’s various tariqas (Sufi orders). The events include art exhibitions, films and talks at literary cafes. In 2001 the festival was praised by the UN as a major event promoting dialogue between civilizations.[12]

El Hassane Debbarh is a young Sufi from Fez while commenting on Sufi Tourism he told me that:

As far as Sufi tourism in Fez is concerned, one cannot speak of an existing industry. It’s still an idea. The term Sufi tourism is still on the air. No maps, libraries, hotels, personnels, agencies, institutions, laws have been created and developed to create such an industry. The cemeteries of Bab al-Futuh, Bab al-Gisa, Bab al-Mahrouq and the mushroomed zawiyas in the old city of Fez need to be restored and brought to life again. People may visit a shrine or two, but are we talking about Sufi tourism here? Fez deserves to be the Sufi capital of the Muslim World. And this is beyond the restoration of stones and pieces of wood. We are speaking of the spirit of a city; the spirit of a country.

El Hassane Debbarh belongs to the Tariqa Tijaniya, and he has a project to restore all the zawiyas and cemeteries of Fez. Indeed, the ancient city of Fes is home to many mausoleums for revered Sufi figures.

When speaking about Tariqa Tijaniya, it is worth mentioning the beautifully decorated zawiya of Sidi Ahmad Tijani in Fez, it/he is widely visited from all over the Arab world as well as Africa. According to the young Tijani Sufi I interviewed, he believes that Sidi Ahmad Tijani is the one who preached Islam in Africa the reason why he is widely visited by Africans. “This Sufi way has since spread all over the world, with large Tijani communities today found in Morocco, Algeria, Mauritania, Egypt, Senegal, Ghana, Nigeria, Niger, Chad, Sudan, South Africa, Indonesia, America and elsewhere.”[13] Besides conferences and festivals on Sufism that welcome tourist from all over the world, such as a Tijani conference in Fez under the theme: “Morocco Hosts World Wide Tijani Conference” that was held in Fez 27-30 June 2007. “Scholars and eminent Shaykhs came from such diverse places as Senegal, Nigeria, Mauritania, Egypt, Indonesia, Pakistan, Dubai, Sudan, South Africa and America to present and discuss the significant historical and present-day role of the Tariqa Tijaniyya in spreading Islam, in guarding the peaceful and expansive essence of the religion, and in actualizing spiritual and ethical training for Muslims around the world.”[14]

To conclude, Morocco does have a great interest in Sufism and its different ways. Al Qaraweyeen library has a huge number of books on Sufism and Moroccan Sufis and zawiyas. Morocco is considered a Sufi country par excellence because of the rich presence of the saints that make it a pilgrimage of different and many religious people. Obviously, this has a great positive impact on tourism and therefore the development of the country. I think that Sufism is a great asset on which Morocco can intelligently expand to potentially reach its goal.

[1] Dr. Faouzi Skali, an anthropologist and an ethnologist; he is a professor from the Ecole Normale Supérieure in Fes.