The former UN representative for the Sahara, Erik Jensen, recently returned to the fray to unveil unsaid details on negotiations between Morocco and the Polisario on the future of the Western Sahara.

Well-known for his outspokenness, the former UN official has just revealed in an interview with a London-based Arabic newspaper that in the 90s, the Polisario leaders were predisposed to discuss with the Moroccan delegation the autonomy option.

Algerian authorities had however done everything and worked hard to urge the Polisario negotiators to stick to the option of a referendum for independence, he said.

Erik Jensen had at that time deemed the referendum option as impracticable. He was later on forced to resign from his position, under the pressure of the Algerian diplomacy.

Erik Jensen, author of a new book on the Western Sahara conflict, revealed that the autonomy option had been raised during a secret meeting he had planned in August 1996 in Geneva between Moroccan officials and representatives of the Polisario.

The Polisario was inclined to discuss a political solution based on autonomy, but it “could not make any decision that might be against the interests of Algeria,” he said. The former personal envoy of the UN Secretary General for the Sahara, James Baker, was convinced too that the autonomy option was the one and only realistic solution, said Erik Jensen who had collaborated with James Baker on the Sahara dossier for one year.

“We have reached a stage allowing me to assert that the Sahara conflict must be addressed in a global frame,” Erik Jensen said, pointing out that Algeria, which shelters on its territory in Tindouf the Sahrawi refugee camps, is directly concerned by this dispute.

The former UN official who brought up Morocco’s decision to withdraw its confidence in the UN Secretary General’s personal envoy for the Sahara, Christopher Ross, underlined that this decision was nothing new.

His predecessors, the Pakistani Yacoub Khan and the Dutch Van Walsum both stepped down after they were rejected by Algeria and the Polisario.

In his interview with the London-based “Acharq Al Awsât”, Jensen said in this regard that “the confidence of the parties constitutes, in handling this (Sahara) file, the custom, the rule and the indispensable condition for every and any UN official, whose sole role is that of facilitator, the benchmark being the relevant resolutions of the Security Council.”

In his interview, the former UN representative for the Sahara also brought up the latest developments in North Africa and in the Sahel as well as the terrorist threats looming on the States of the region.

In this vein, Jensen warned against the strategy of terrorist groups which forge alliances and recruit new fighters in the Tindouf camps in Algeria, not far from Northern Mali.

Jensen, on the other hand, spoke at length about the frustrations and despair of the Tindouf camps populations which see no change, no beam of light at the horizon. The future of these populations is clouded by uncertainty, at a time the Polisario leaders make no effort to settle this conflict, Erik Jensen told the paper. 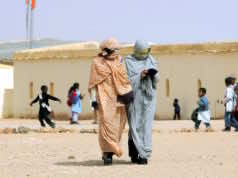