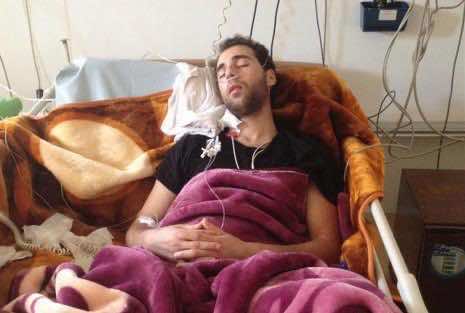 Everybody in life is subject to the unexpected and abrupt vicissitudes of life but we usually tend to evade thinking about the transience of what we have so that we can live happily and indifferently! A wise Arabic proverb says: “Health is a crown on the head of the healthy that only the sick can see.” It’s so true! This crown, sadly, has been ripped of Mohammed Amine Boubdali’s head who counts his days in the Hospital Ibn Sinaa in Rabat, connected to a set of wires and devices that replace the function of his frail heart.

Mohammed Amine, a 25 years old young man, like most people in his age, was full of energy, ambition and determination to make of his life the best he can until he was surprised at the middle of his educational and professional success by this illness that tie him permanently to his bed in the hospital. He left France in 2011 after graduating from the Belfour Institute of Technology as an engineer. Now he wishes to be back in France not to continue his studies but for a heart transplant- an operation which is not yet possible in Morocco.

The widow mother has nothing to afford but her wholehearted supplications to God to help her son recover again. The cost of transportation of Mohammed Amine from Morocco to France aboard a special plane that should be equipped with the same devices he uses in the hospital and the heart transplant will amount to 3 million dirhams ($350,000).

The amount of money needed for the transportation and the operation seems impossible to afford for his family. The more days Mohammed spends on his bed in Rabat, the more his mother and family get anxious and pessimistic about his life. The mere act of electricity going off can end his life!

Mohammed Amine Bouabdali has been in the hospital of Rabat for three weeks so far and in need of an urgent medical operation that excessively expensive. His mother calls on philanthropists to give and wishes the intervention of anyone who could make this operation possible.

There are those who give little
of the much which they have-
and they give it
for recognition and their hidden desire
makes their gifts unwholesome.
And there are those who have little and give it all.
These are the believers in life and the bounty of life,
and their coffer is never empty.

You often say,”I would give, but only to the deserving.”
The trees in your orchard say not so,
nor the flocks in your pasture.
They give that they may live,
for to with-hold is to perish.

On Giving: excerpt from “The Prophet” by Kahlil Gibran

For anyone wanting to contact the mother, this is her phone number: