Morocco World News
Home Society Expatriates Journals of a Moroccan Fulbrighter in America (8): The story of an...

Austin - Kevin is a young American who converted to Islam more than a year ago. I had noticed that, whenever he mentioned the name of the Prophet Mohammad in class, he would always utter the expression: “Peace be upon Him”. For some time, I thought he did that out of respect for the Muslim audience rather than for the Prophet. I didn’t find out about his conversion until the day of the Eid when he joined us for breakfast. I decided immediately to ask him for an interview to write about his story. 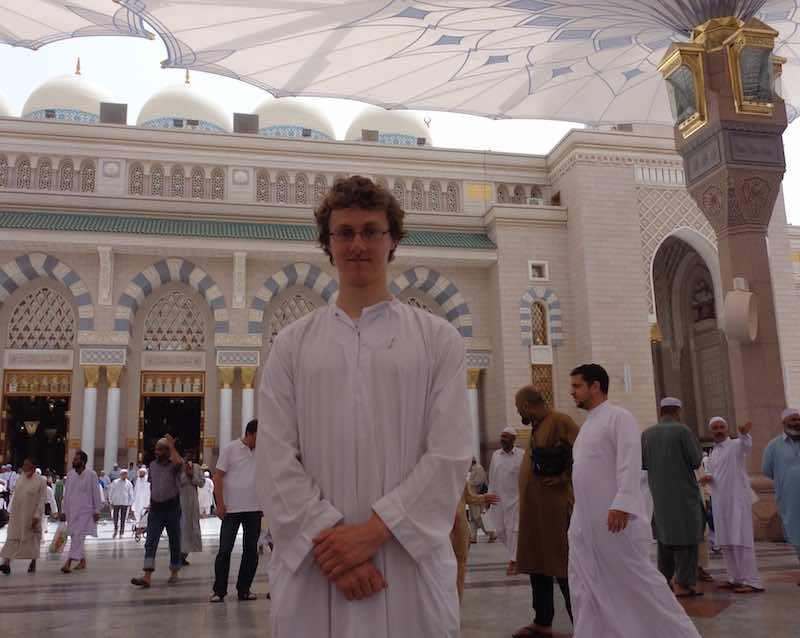 Austin – Kevin is a young American who converted to Islam more than a year ago. I had noticed that, whenever he mentioned the name of the Prophet Mohammad in class, he would always utter the expression: “Peace be upon Him”. For some time, I thought he did that out of respect for the Muslim audience rather than for the Prophet. I didn’t find out about his conversion until the day of the Eid when he joined us for breakfast. I decided immediately to ask him for an interview to write about his story.

I must say, however, that writing about Kevin turned out to be a hard task. Before going to sleep last night, I spent quite some time thinking about the matter and how I should tell his story without doing him much injustice. Since I first came to notice him, my impression has been that he is a polite and well-bred young man. During the interview, I realized how sensitive and how respectful for others he was, how emotional he could be. I guess his quest for the perfect and the sublime is a reflection of this aspect of his character. But I must hasten to say that I can’t pretend to have understood him perfectly; in fact, I’m worried my portrait of him might not reflect his real person. I listened to my interview with him again and again; I went through my memories of him again and again in search of anything that could help disclose his point of view. All I could find were images, words and expressions. But these are not mirrors of the soul; they are just clues or codes that need deciphering or interpretation in order to uncover the inner spirit. Still, I doubt I have enough clues to uncover Kevin’s inner spirit, and for that, I must apologize to him for this imperfect portrait.

Kevin reports that his childhood was typical of that of a white European American. His parents raised him in an American lifestyle (a “post-modern” lifestyle, as he puts it). All their attention went to the concerns of this life, but little attention was paid to the hereafter. Perhaps the only feasts Kevin knew as a child were Christmas and Halloween. But these have almost lost all religious connotations and became mere mundane ceremonies. At least this is how Kevin thought about them, judging from what I understand from him. His religion was America. He says he was very patriotic as a teenager. Somehow, he developed the idea that the world was divided into two parts: America and the others. All these others were hostile to varying degrees and should be combated when necessary. In his zeal, he dreamt of joining the army, he read about special military forces and special operations. He admits that his knowledge about the rest of the world was very superficial and, perhaps, completely distorted by stereotypes.

But Kevin also received a good education. He is aware that the values he was inculcated as a child were wonderful. In addition to open-mindedness, he was also taught self-respect and respect of others, patience and, it seems to me, many other good values. It’s true that his family did not introduce him to the world of religion, but he was not the only one. He realizes that his surrounding used to lead more or less the same life. For me, Kevin’s education is good proof that morality can be maintained independently from religion. It’s clear to me that Kevin has a good heart, and that what made him seek a true religion was not the contrast between good and evil, but rather something that is beyond my understanding. He says that at the age of seventeen, he was already being tormented by questions about the meaning of life. He seemed to believe that there was something more real and more true beneath the permanent running after girl-friends, cars, good jobs and so on and the so forth. Only that meaningful thing underneath could fill the vacuum in his soul.

Travel brought the young out of his shell. He went first to Argentina, then to China, the Czech Republic, Bulgaria and Germany. The trips were organized by some youth organization and, from what I understand, the purpose was to help form future generations of leaders. Kevin must have been considered smart enough to be chosen for that mission. But according to him, those trips were short and of a tourist nature. One cannot expect to get any significant understanding of a people while he is a tourist. Instead, it was reading that provided him with a better outlook. His grand-mother gave him a book about China as a present, probably because she had noticed his interest in the topic. It’s hard to tell, but I guess his interest in religions went along his curiosity about cultures. We can imagine that his thirst to know about different peoples also included interest in their beliefs about afterlife. Or was it his interest in religions that was behind his readings about different cultures?

When I think about Kevin’s experience, I feel astonished about humans’ desire to find out the meaning of things beyond their material or concrete nature. Kevin says he was vaguely connected to Christianity; the first time he heard the word ‘Trinity’ was in a recent science-fiction movie when one of the characters had it for a name. The idea that God in the Christian creed has three elements (Father, Son and Holy Spirit) was completely strange and perhaps incomprehensible to him. He must have done a lot of effort to find something appealing to his mind. His parents bought him the Holy Quran, a Mushaf, most probably because they had noticed how curious he was about Islam. But I guess they weren’t aware of the degree of his involvement with this religion. “I didn’t go to Islam, I was drawn to it”. This is how Kevin describes his conversion. He repeated the sentence on a number of occasions during the interview, accompanied by a gesture showing that someone was pulling him from his shirt. Now and then, he would stop speaking and sigh, his head down leaning on his hand in a thoughtful manner. His way of expressing himself, his sighs and his gestures made me quiver sometimes. I was convinced by the strength and the authenticity of his feelings: the young man was not merely experimenting with his life.

According to him, his first involvement with Islam happened when he was learning Arabic. At university, he chose to specialize in Spanish and Arabic. He had no particular reason behind his choice, or probably he has forgotten about his motivations. It happened that the textbook they were using to learn Arabic contained some verses from the Quran. He had also some Muslim classmates. These simple ingredients were sufficient to spark in him the desire to learn more about this religion. I would rather say that these elements merely provided a new outlet for his old concerns about the meaning of life.

So, he studied Arabic and read about Islam mostly in English. Here, I must point out that his first sources were books written by Orientalists, which suggests that not all Orientalists are hostile or subjective about Islamic culture, as Arabs tend to believe. He travelled to Tunisia, Egypt, Jordan and other Muslim countries. He read the whole Quran, consulted Al-Bukharis’s Sahih, studied Islamic history, made acquaintance with Arab and American Muslims, and many other things. I asked him if his acquaintance with Arabs and the Arab world had contributed to his conversion, but he mentioned that Cat Stevens allegedly said: “Thank God I’ve known Islam before Muslims”. What he disliked most was the rough behavior of some people on the street. He also regrets the blood-shedding in some Muslim countries. But all these negative sides have not affected his devotion to Islam, which he considers basically a religion of peace and love.

Now, some Muslim readers of Kevin’s story might exalt in his conversion. They would think that at least we are guardians of something that can appeal to others. I tend to think more of Kevin’s culture which gave him the freedom to choose. When he announced his conversion, nobody treated him as a traitor or sentenced him to beheading. Even his family were not angry at him, though he was very much concerned about their reaction. He didn’t have to hide his conversion for a long time or forever. He believes that his mission in the future will be to get America and Islam to know each other, to build bridges between them. On my part, I hope he and people like him can figure out how the liberty of America and the beauty of Islam can be combined, but most of all, I wish him good luck and happiness.