Austin - Who could imagine that I will find students learning Moroccan Arabic at the University of Texas? Here, as in other American universities, it is widely believed that the Arabic language is best associated with Egypt and, to a lesser extent, the Levant. It was mere coincidence that brought together some friends of Morocco who believed that Moroccan Arabic was as beautiful as any other Arabic variety. 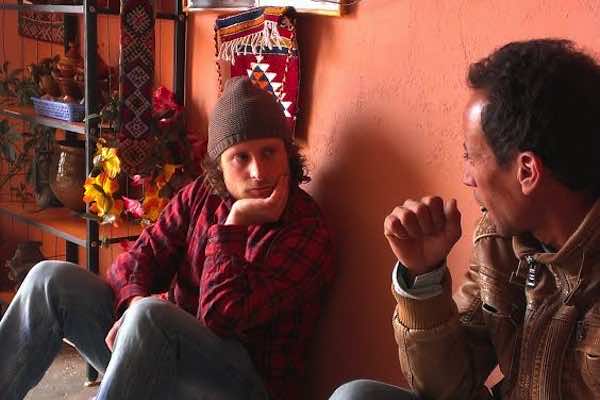 Austin – Who could imagine that I will find students learning Moroccan Arabic at the University of Texas? Here, as in other American universities, it is widely believed that the Arabic language is best associated with Egypt and, to a lesser extent, the Levant. It was mere coincidence that brought together some friends of Morocco who believed that Moroccan Arabic was as beautiful as any other Arabic variety.

Si Mike is one of these people. His story with Morocco started a few years ago when he decided to be a volunteer in Peace Corps. When he was a student at university, he started learning Arabic, but he was not very serious about it. It was probably part of the Arabic program that he travelled to Amman, Jordan, and Jerusalem. There, he managed to pick up the Levantine variety of Arabic. It was also an opportunity for him to develop a close relationship with the local population and, I guess, a keen interest in knowing their culture better. He says his short stay in the Middle East was not enough to achieve that end. Nor was it sufficient to master the language well.

After graduation, he thought of living an adventure first before settling down in America. I don’t know whether he found out about Peace Corps by mere coincidence or whether the Peace Corps was his only chance to live an exceptional experience. But he says that this organization enjoys a good reputation among Americans. Si Mike still believes that it is one of the best achievements of the American government in terms of establishing rapport between American youth and local populations around the world. But the rules of Peace Corps are a little harsh: once you accept to be a volunteer, you can’t choose the place you will go. Si Mike was ready to go to China, but he expressed his preference for the Middle East, especially that he had some knowledge of Arabic.

There were two options for the Middle East in the Peace Corps: Jordan and Morocco. Of course, Si Mike would have preferred Jordan, given that he had visited the country before. In comparison, his idea about Morocco was very slight, or he had no idea at all. He could remember a Moroccan administrator at university who spoke to them only in Classical Arabic and was rather reticent. There was an idea that Moroccan Arabic was difficult and, of most of the Arabic dialects, it was the most divergent from Classical Arabic. I don’t know who was behind the dissemination of this idea, but the fact that the Moroccan administrator spoke Classical Arabic only probably reinforced that belief among the American students who knew him.

After a period of six months, Si Mike received the answer: Morocco. He was not very happy, but he was not sad either: at least he didn’t have to go to China. In Rabat, they stayed at a hotel for a few days for training. The training was carried out by Moroccan instructors and it focused mainly on language. There were too many activities during that period, for they couldn’t leave the hotel for quite a few days. When Mike first went out to discover the city and try his linguistic skills with Moroccans, he got frustrated. He can still recall when he asked a shopkeeper for a drink but the shopkeeper responded in an informal way, which Mike could hardly understand. I can imagine how he complained to his instructor and how the instructor tried to encourage him saying that it was a matter of time and that he should be patient.

Part of the training was also to stay a couple of months in Azrou and Mrirt. At Azrou, they stayed in a reception center. Mike had to sleep with ten other young men in the same room, which was a shock to him then, but not now after all he had gone through. At Mrirt, he stayed with a local family and he continued working on his language skills. At the local youth house, he contacted many youngsters and got introduced to the local culture enough to start the next stage.

Then came the decisive moment when he would be sent to a village to spend the rest of his serving period. The volunteers received envelopes which enclosed a document in this connection. They were as much worried as Moroccan teachers usually are after their training. Si Mike found out that he would be staying in Taznaght, Ouarzazate. It is not hard for me to imagine his frustration at that time since I went through a similar experience some twenty years ago. As a young teacher of English, I was sent first to Errachidia, and there I was sent again to a small village 180 km east of the town. The only difference is that I was serving my country and my people while Si Mike was serving an abstract cause I can’t understand well, perhaps Mankind.

At Taznaght, he stayed with a local family. The father (Mike calls him “bba”) could speak Arabic but the mother spoke only Amazigh. So Mike had to to learn Tachlhyt too, if only to thank his host. He soon got introduced to most of the inhabitants. You could imagine him greeting everyone he met in the street or sitting in a café with friends, for he stayed there for two long years. Rarely did he go out of the village because he wanted to stay close and because he didn’t have enough money: he used to receive 2000 DHs a month! Perhaps the only occasions he travelled inside Morocco was when he accompanied a small group of children to summer camps in Imouzzare or El-Jadida. On those occasions, he discovered other aspects of the country which can be completely different from what he saw in mountain towns. He watched the children he accompanied experience some sort of cultural shock as they intermingled with peers from Casablanca or Rabat. Mike, like many other Americans, is astonished by the diversity of the country.

After this two-year period in Morocco, he thought about graduate studies in Arabic. He was accepted at the University of Texas, where he is also teaching Moroccan Arabic. Except for Dr. Brustad, no one there could speak this Arabic variety. Mike managed also to write an M.A thesis about this variety. Immediately after that, he got a Fulbright scholarship to return back to Morocco. This time, he spent most of his time in Ouarzazate, but he also travelled extensively in the country. With his knowledge of Arabic and Tachlhyt, his objective is to study contact between the two languages and how it affected the structure of both of them. As a teacher, he is also developing material to use for various teaching activities. His knowledge of linguistics helps him a lot because there is no complete written grammar of Moroccan Arabic as yet.

Another activity that Si Mike runs weekly is the Moroccan Arabic table. I’ve always attended this activity since I was first invited to it. The idea is to bring together scholars who are interested in the Moroccan language and culture. They have a beautiful tea pot and a tray and, from time to time, they bring mint and mix it with tea. Topics of discussion are various and range from languages to traditions and society. But everyone has to express himself/herself in Moroccan Arabic.

Towards the end of the interview, Si Mike expressed an idea that sums his experience. He says he is very happy to have been in Morocco and that he now realizes that, no matter how different cultures may be, human beings remain basically similar. Having known some Americans in this short stay, I cannot agree more with him.