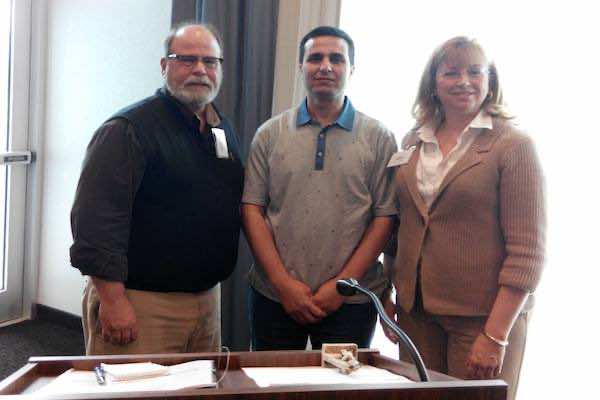 The Enrichment Program is implemented by the Council for International Exchange of Scholars (CIES) on behalf of the U.S Department of State Bureau of Educational and Cultural Affairs (ECA). According to the website of the Fulbright Scholar Program, “these activities are designed to enable scholars to better experience America and to further the Fulbright program’s goal of increasing mutual understanding between the people of the U.S and people of other countries.”

Last week, I attended one of these seminars which was held in St. Petersburg, Florida. It was organized on behalf of CIES and ECA by World Partnerships Inc., a private not-for-profit organization and the official U.S Department of State partner for hosting global leaders in Florida’s seven county Tampa Bay area. The president of this organization, Gary L. Springer, and its executive director, Mary Ellen Upton, seem to have a long experience in this domain. Their CVs are a few pages long and they make reference to a lot of international events they contributed to. What I will always remember of these two individuals, however, has nothing to do with these responsibilities. I will remember their modesty and their kindness. Gary seems to me to be experienced and wise. I don’t have the slightest idea about his history, but it seems that his connection with people from different parts of the world has contributed a lot to his wisdom. I watched him converse with Indians, Nigerians, Pakistanis and many others with the same ease that he would converse with people whose English is more comprehensible. I must admit that communication with some scholars from these countries was not always easy for me and sometimes it simply ended in a breakdown.

The 2014 Fulbright Visiting Scholar Enrichment Seminar was held under the title “Climate change and the plight of the oceans”. I must concede that the topic was not the primary reason behind my application for participation in this seminar. It’s not that I was not aware of the dangers that human activity has for the environment, or that I was disinterested in any action in favor of it, but rather because other interests do not leave me enough time. My country, Morocco, has about 3000 kilometers of shores on both the Mediterranean and the Atlantic seas and it’s highly probable that the waters are much polluted. What makes me less worried about the issue is that there are already NGOs operating on the ground and raising consciousness against land and sea pollution. One of these NDOs is headed by a princess. What is happening beneath the surface, however, remains unknown to most of the population, and the local media rarely stop to consider this aspect of men’s damaging activities in the ocean. Perhaps I should draw the attention of the environmental activists to the work of Dr. Sylvia Earle and try to provide the Arabic dubbing to her film. I should also encourage students to prepare short films to participate in environmental short film festivals.

There were a lot of activities for Fulbrighters. There was a reception in the first night at the South Florida College of Marine Science. Among the prominent speakers were Honorable Betty Castor, the Vice-Chair of William J. Fulbright Foreign Scholarship Board, and Dr. Jacqueline Dixon, the dean of the College of Marine Science. There were 76 visiting scholars from about 40 countries, even from Western Europe and Australia. One thing that struck me that night was that the Muslim Fulbrighters – and there were many of them – were concerned about meat and whether it was ‘Halal’. But there was fish for those who wanted to avoid uncertainty. During the following days, I guess the organizers took good care of the issue.

I don’t want to bore the reader with the details of the seminar. In brief, there were lectures, speeches, political debates, receptions, visits to museums and a cruise at the Tampa sea port. Most of the activities were related to the sea. But I must stop at two special activities that I think I will never forget. The first one is the dinner kindly provided for us by the students and their families at The Canterbury School. It was raining and a bit chilly, but the discussions inside were warm and entertaining. I sat at the table with a 13-year-old boy who answered my questions about his life and his interests before he started asking me and a few others about ourselves and our families and countries. He was extremely polite. I don’t understand why these families would be interested in receiving foreign scholars, but I do understand that their generosity has left a great effect on us. Even my Australian roommate, who was rather reticent, couldn’t help asking for the microphone to express his thanks.

The second activity that was equally significant was sea oats planting. One morning, we joined volunteers to plant around 8,000 sea oats in order to prevent sand erosion. The task was not challenging at all, and I don’t think that our voluntary work was badly needed either. The action was meant to be symbolic and I found the idea an ingenious one. (I guess it was Gary’s). For me, the few plants that I managed to sow will connect me to the place and its people. I don’t like to take without giving, but I don’t have much to give. I hope those plants will express some of our gratitude.

Perhaps the main idea behind the Fulbright Scholar Program is to get other people to know the people of the U.S, but Fulbright Enrichment Seminars manage to bring peoples of the planet together. I’m not an experienced traveler, and all I know about the world is what I get from books or TV news and documentaries. But the conversations I had with scholars from different countries were far more informative in some respects. We asked each other about traditions and changes happening in our societies, about languages, ethnic groups, living standards and many other things. We even checked our inaccurate information about each other’s countries. I had the occasion to talk about my country to many people, and I found it delightful to do so. Some of the friends that I’ve made promised to visit Morocco, and I promised to visit their countries. I’m not sure we will keep our promises, but at least we have known each other.

Finally, I would like to end with a sentence that one of the speakers uttered on the last day of the event when he said: “I came to the United States and I found myself in the United Nations!”