Dakhla, Morocco - Kenya's Former Prime Minister Raila Odinga urged Morocco and Algeria to reconcile and engage more with one other to foster economic prosperity and enhanced security in Africa. 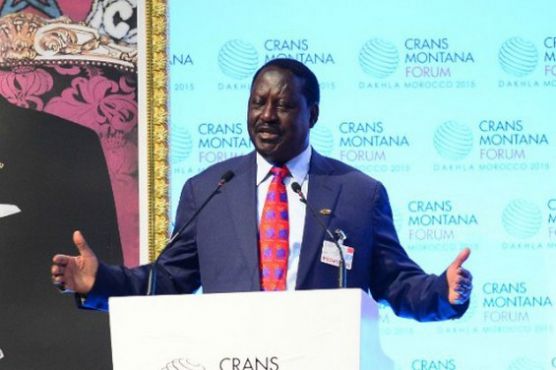 By
Aziz Allilou
-
Aziz Allilou is a student at the Higher Institute of Media and Communications (ISIC) and Morocco World News correspondent in Rabat.
Mar 15, 2015
Spread the love

Dakhla, Morocco – Kenya’s Former Prime Minister Raila Odinga urged Morocco and Algeria to reconcile and engage more with one other to foster economic prosperity and enhanced security in Africa.

Odinga made the statement on Saturday at the 2015 Crans Montana Forum on Africa and South-South Cooperation, held in the Moroccan southern city of Dakhla, located in the so-called Western Sahara.

Odinga said that as a result of the lack of economic cooperation between Morocco and Algeria, the two countries regard Europe as their primary economic partner, and African countries are therefore forced to import both countries’ products from Europe at high cost.

Morocco, he said, is rich in phosphates that are used in fertilizers, while Algeria has high reserves of oil and gas. “Algeria is one of the largest providers of gas to Europe in a club that includes Russia and Norway. Morocco has almost half the world’s reserves of phosphates which are needed for fertilizer. Yet much of Africa, including my country Kenya, imports fertilizer from Europe. We could easily get it from here,” the former Prime Minister explained.

Odinga said that while the North African states consider Europe as their primary economic and diplomatic partner, they tend to view Sub-Sahara Africa with little enthusiasm, especially in trade and diplomatic cooperation. “Hence, the region has products that the rest of the continent is forced to import from Europe at high costs,” Ordiga added.

Talking to Morocco World News, Odinga stated that Sub-Saharan Africa and the Maghreb “have a lot in common,” historically and economically. “But, nowadays, stronger ties between North Africa and Sub-Sahara Africa are essential for fostering economic prosperity on the continent,” he explained.

Trade should be expanded among between the Maghreb, Sub-Saharan Africa, and Europe,” he continued. “Therefore, we are calling on Europe to allow market access to goods coming from Africa to the European market. And then we can reciprocate by importing the European goods,” Odinga told MWN.

“Historically, Africa was just a market for goods coming from Europe, but if you expand the trade, then you have more opportunities,” he added.

Odinga said that that if you create greater opportunities for entry into the continent, more African youth will be gainfully employed. Otherwise, youth might risk their lives in order to get to Europe illegally.

“They won’t have to go to Europe for better opportunities. We can create opportunities in Africa, in both the Maghreb and Sub-Saharan Africa. This is a long-term solution to the problem of illegal immigration to Europe,” Odinga concluded.