Rabat - The UK's Foreign and Commonwealth office has updated its travel advice to British tourists in response to last week's massacre in the Tunisian resort town of Sousse. 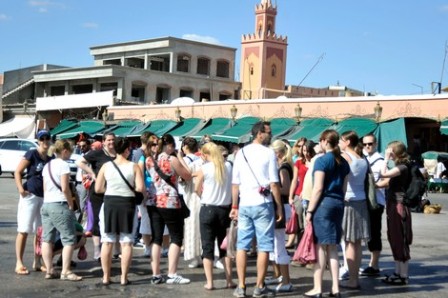 Rabat – The UK’s Foreign and Commonwealth office has updated its travel advice to British tourists in response to last week’s massacre in the Tunisian resort town of Sousse.

The travel advice downplayed the risks for British tourists traveling to Morocco, saying that there is a “general threat of terrorism, but overall it is trouble-free.”

The Foreign Office added that the Moroccan authorities have raised their National State of Vigilance and deployed additional security forces in major population centres.

It also urged the over 400,000 British nationals who visit Morocco every year to bear in mind that Morocco is a Muslim country which follows Islamic laws and customs.

The Office added that there have been demonstrations in various locations across the country, most of which have been peaceful. It also advised British tourists to remain vigilant while on the roads, saying that Morocco has a poor road safety record.

The travel advice has also warned that terrorist attacks in Tunisia, including in tourist resorts, are possible. It said that potential attacks could be carried out by “individuals who are unknown to the authorities, and whose actions are inspired by terrorist groups via social media.”

The Foreign Office said that there is a high terrorism threat in Turkey and there are active terrorist groups throughout the country. It has also warned against possible attacks that could be indiscriminate and could affect places visited by foreigners.