New York - French Interior Minister, Bernard Cazeneuve, said in a press conference on Thursday that a country outside of Europe helped French intelligence services locate the two terrorists that were cornered and killed on Wednesday in Saint-Denis, in Paris suburbs. 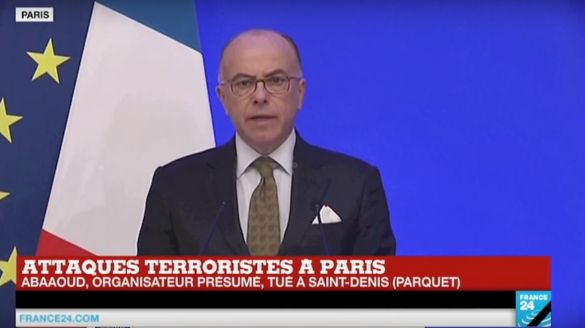 By
Adnane Bennis
-
Adnane Bennis is a national of Morocco, obtained his Bachelor’s Degree in Computer and Information Science from East west University in Chicago.
Nov 19, 2015
Spread the love

New York – French Interior Minister, Bernard Cazeneuve, said in a press conference on Thursday that a country outside of Europe helped French intelligence services locate the two terrorists that were cornered and killed on Wednesday in Saint-Denis, in Paris suburbs.

The French official said that no European country informed his country’s intelligence services of the arrival of Abdelhamid Abaaoud in France.

“It was only on November 16, after the attacks in Paris, that the Intelligence Services of country outside Europe reported that it was aware of his presence in Greece,” said today French Interior Minister.

Morocco has long played an important role in fighting terrorism trough information sharing, which has helped thwart several terrorist attacks in a number of European countries, such as France and Spain.

Morocco’s role in the fight against terrorism was highlighted by a number of French politicians last January following the Charlie Hebdo attacks, which killed 17 people.

Reacting to the attacks, the late former French Minister of Interior Charles Pasqua expressed regret over the distended relations between Morocco and France and called on the French government to take the necessary measures to bring them to normal.

“Currently, however, our relations with Morocco, which was one of our main sources of information, are considerably distended, for reasons that I do not know,” he explained.

The same opinion was expressed by former Prime Minister, Jean Jean Pierre Raffarin, who called on the French government to “quickly re-establish dialogue with Morocco.”