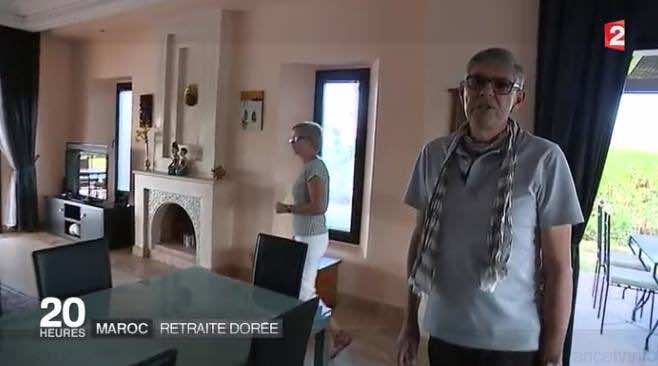 By
Karla Dieseldorff
-
Karla is an award-winning actress and producer.
Jan 4, 2016
Spread the love

A video report by France2 show “20 Heures” featured the qualities that are making Morocco “The Golden Retirement” location.

Nicole and Patrick, a French married couple spend the winter in Morocco. For three weeks, they enjoy the beauty of Moroccan winters and the retirement home they purchased and made their own.

“We have a climate that is truly exceptional. It’s a paradise,” Patrick told “20 Heures,” while expressing the great joy he feels in Agadir.

“This is our reward,” Nicole added. For the last five years, they spend six months out of the year at a campsite near Agadir.

It only took one visit for this French couple to fall in love with Morocco when they vacationed in the same area back in 2010, they revealed.

Patrick and Nicole invested € 45,000 in a quaint mobile home of 60 square meters with an outdoor terrace, a large living room-kitchen area and two rooms to accommodate kids and grandkids.

This is “High-end” Patrick said, while proudly giving a tour of their beloved home. Yet, this French couple is not the only one to have discovered the magic of Morocco.

Agadir camp’s residents are in their vast majority (90 percent) retired French nationals, and the population has doubled in the last three years, the camp’s manager Kaidi Khalid told “20 Heures”.

France2 correspondent Anthony Jolly said there are nearly 60,000 retired French citizens living in Morocco. The growing need for retirement homes has prompted the construction of gated communities across Morocco.

An aerial view shows a real estate development especially designed for retirees in Agadir. The 28-hectare complex consists of 163 villas with private swimming pools, as well as resort-style community areas.

Owners and retirees reside at the village year-round. Guarded by 24-hour security, the fully equipped villas provide residents with plenty of comfort and a quality of life they desire for their families.

Enjoying a less complicated and more affordable lifestyle as some of them revealed, French citizens grow fonder of Morocco by the day.

The vast majority of Moroccans speak French as a second language, which makes it a perfect place for French-speaking people to feel welcomed and at ease among the locals.

Fully-integrated in the Arab and Berber local community of Agadir, William, a retired French citizen living in Morocco said he and his wife Nicole love Morocco’s hospitable environment and its low market prices.

As far as feeling safe, William said he does not fear for his life in Morocco. He feels protected by the Moroccan people who consider this French community of residents “just like Moroccans, like brothers,” a local man stressed amidst smiles.