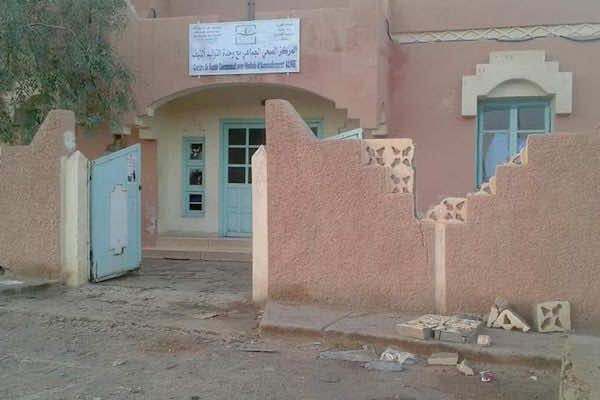 Ourrzazate – Almost every week a pregnant woman or infant dies because of the absence of medical care in the Alnif region.

Alnif is a small town in southeast Morocco surrounded by a coalition of more than 25 villages. Alnif has a small hospital with just one doctor who “takes care” of the area’s 42,634 residents.

The villages are scattered around Alnif as far as 60 kilometers away, with the nearest village seven kilometers from Alnif. People living in Alnif’s surrounding villages find it difficult to reach the hospital in times of emergency.

This hospital lacks the most basic materials and medicine that patients need for daily life. In emergency cases, they must travel to Errachidia. The 185-kilometer trip takes about three hours.

Khadija’s story is an example of what women in the region face every time a labor and delivery takes place.

Moulod, one of the residents of Amgan, a small village 50 kilometers from Alnif, described what happened to his wife.

“Khadija felt the beginning of labor. She informed us and we all started running in different directions in the village to find someone who would carry her to the nearest hospital. After an hour, one of the neighbors was ready to make the trip. My mother-in-law and I accompanied her. The driver of an old Mercedes Benz 240 started rolling down the unpaved rural road towards Alnif. His foot was on the accelerator to speed as fast as he could. He had to be careful because the woman was pregnant,” Moulod said, referring to his wife as “the woman” as is the local custom when speaking to strangers. “But he had to drive quickly because she might die any time.”

“The woman was screaming throughout the trip, but her voice was quieted by her teeth biting a small piece of cloth.”

“Arriving at the small hospital in Alnif, the only doctor in town examined her, and immediately said that the woman was in emergency, and she needed to go to nearest hospital in Errachidia.”

“After driving a few kilometers away from Alnif, the woman’s voice was heard no more. She died. I didn’t know what to do. I was shouting different curses on the situation; her mother was crying. The automobile didn’t stop with the hope that the baby might be saved.”

“Upon arrival to Moulay Ali Chref Hospital in Errachidia, the doctor said that it was too late: the baby also died.”

Moulod stopped speaking and could not finish the interview.

The majority of the women in the area face similar dangers. Many women have died because of the lack of a quality hospital in the area. There is no delivery room for women despite the note at the front of the hospital that claims there is.

People in Alnif face many hardships but the worst of all is the absence of adequate medical care in the entire region.

The only hospital, located in the centre of the town of Alnif, provides only minor care.

Another resident of Alnif said, “Here in this hospital they only give us the red medicine and the yellow pomade,” referring first to a red liquid injury medicine and a yellow ointment for treating eye diseases.

The biggest dream for the people in the region of Alnif is a bigger hospital with the necessary equipment to deal with all potential medical emergencies. This is especially important for the women who spend months of pregnancy anticipating the potential for a dangerous or even deadly delivery without appropriate medical care.