Rabat - Rachid Belmokhtar, Moroccan Minister of Education said on Wednesday in Rabat that English will be taught in the fourth grade of primary school, according to Maghreb Arab Press (MAP). 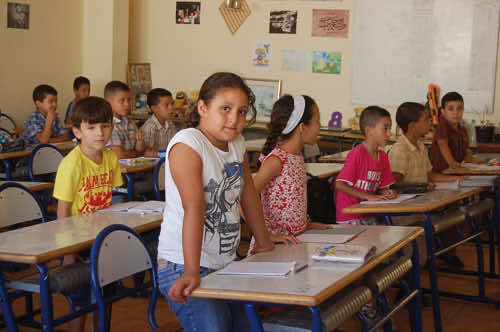 Rabat – Rachid Belmokhtar, Moroccan Minister of Education said on Wednesday in Rabat that English will be taught in the fourth grade of primary school, according to Maghreb Arab Press (MAP).

“The teaching of English that will start from the 4th grade will be particularly important in education,” noted the minister, while welcoming the results of the program “Access” for learning English in middle schools, a pilot experience that will be extended to several institutions  in secondary education.

The Minister went to add that the promotion of foreign languages is “likely to increase opportunities for students to easily integrate into the labor market while allowing them to open up to science subjects.”

According to the Minister, this openness “is necessary to strengthen the strategic position of Morocco, and honor its agreements with English-speaking or Spanish-speaking countries.”

A report published by Moroccan think tank Rabat Center for Political and Strategic Studies last summer urged the Moroccan government to adopt English as the country’s first foreign language instead of French. The report pointed out that the teaching of English across the country is of paramount importance to enable Moroccan students to compete in today’s job market.

“Maintaining the French language directly after Arabic in the curriculum is neither based on objective measures nor on standards offering good opportunities both locally and internationally for Moroccan students,” the center said.

Last year, Abdelilah Benkirane, head of the Moroccan government, said that Morocco should turn English into its primary language of education “because it is the language of today’s science, technology, and commerce.”