Johannesburg - Morocco stressed, on Wednesday in Johannesburg, its determination to broaden cooperation with African countries in the water sector by offering its know-how in the management and development of water resources. 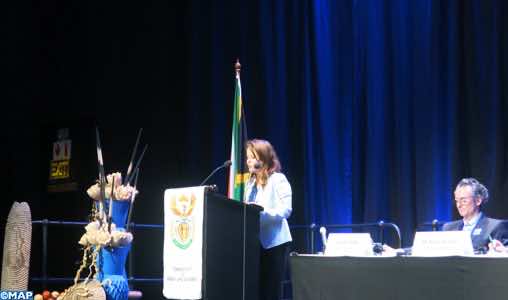 Johannesburg – Morocco stressed, on Wednesday in Johannesburg, its determination to broaden cooperation with African countries in the water sector by offering its know-how in the management and development of water resources.

As part of South-South cooperation, Morocco has initiated partnerships with friendly African countries to share its expertise and know-how, said minister delegate for water Charafat Afilal at the opening of a symposium, held under the theme “Appropriate technology to ensure proper development, use and maintenance of dams in developing countries”, organized on the sidelines of the 84th annual meeting of the International Commission on Large Dams (ICOLD). Afilal highlighted the Kingdom’s keenness to expand its partnerships throughout the African continent.

During the opening ceremony, marked by the participation of South African minister of water Nomvula Mokonyane and Chinese vice-minister for water resources Liu Ning, the Moroccan official showcased the policy of water resources mobilization to which Morocco committed for more than 5 decades due to its awareness of the importance of dams to reinforce water security.

Morocco has 140 big dams with a storage capacity of over 17.6 billion m3, she said, adding that this enabled Morocco to supply populations with drinking water, develop irrigation to contribute to food security and meet the need in water for productive sectors.

Fourteen huge dams are under construction in Morocco, the official noted, saying that 40 others will be built by 2030, which will bring the storage capacity to 25 billion m3. Johannesburg meeting is marked by the participation of more than 1500 delegates from around the world, mainly from African countries.