Fez - King Mohammed VI  chaired, on Tuesday at the Al Qaraouiyine Mosque in Fez, the inauguration ceremony of the Higher Council of the Mohammed VI Foundation for African Ulema. 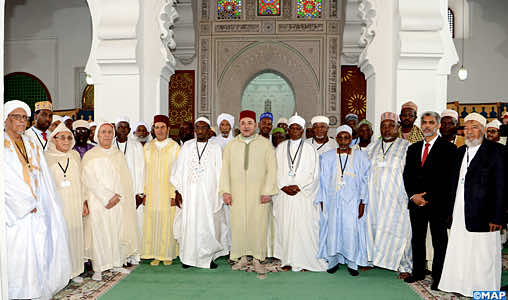 Fez – King Mohammed VI  chaired, on Tuesday at the Al Qaraouiyine Mosque in Fez, the inauguration ceremony of the Higher Council of the Mohammed VI Foundation for African Ulema.

After the reading of some verses of the Holy Quran, the King, Commander of the Faithful, delivered a speech in which he said the Foundation is an institution for cooperation, for the exchange of experiences and for the Ulema to make concerted efforts to “fulfill their duty and turn a spotlight on the true image of the pristine Islamic faith as well as on its open-minded values, which are based on moderation, tolerance and coexistence”.

“My decision to create this institution has nothing to do with transient circumstances or narrow, passing interests,” the Moroccan monarch underlined.

This initiative is rather in line with an “integrated policy to promote constructive cooperation and respond to the requests from a number of sister African nations in the religious domain,” he noted.

The King voiced His conviction that the Foundation, through its branches in African countries, and together with other religious institutions, “will play its role in disseminating enlightened religious precepts and in combating extremism, reclusiveness and terrorism – which our faith does not embrace in any way – but which are advocated by some clerics, in the name of Islam.”

Subsequently, Minister of Endowments and Islamic Affairs, Deputy Chairman of the Foundation, Ahmed Toufiq, delivered an address before the King in which he stressed that the African orientation of the King’s policy is not dictated by short-term cooperation policy considerations limited to the exchange of goods and reciprocity of interests, but it is a multidimensional orientation drawing its specificity on geographical ties, historical relations, scientific substrates and spiritual sensibilities, backed by sharing religious and doctrinal constants between Morocco and many African countries.

In an address on behalf of the members of the Higher Council of Mohammed VI Foundation for African Ulema, Boubacar Doukoure, Alem of Burkina Faso, said that the presence of these Ulemas illustrates their support and blessing of the initiative of the Commander of the Faithful, which aims “to create an entity that enables African Ulemas to promote cooperation for the service of their religion and the development of their societies.”