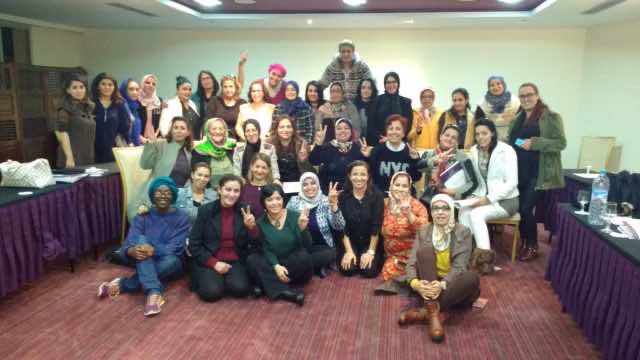 Domestic violence is not a crime in Morocco.

Rabat – Stephanie Willman and Saida Kouzzi, along with a slew of NGOs and women’s rights activists, are working to change this.

Willman and Kouzzi are the founding partners of Mobilising for Rights Associates (MRA), a non-profit women’s rights organization that engages in international advocacy, facilitates grassroots level human rights education, provides legal assistance, and mobilizes women through national law reforms, among other things. For 16 years, MRA has worked to promote women’s legal and human rights in the MENA region and beyond through collaborations with other NGOs.

One such collaboration took place early Tuesday morning on Dec. 6. MRA gathered advocates for strengthening Bill 103-13, on violence against women, which is currently in front of the House of Councillors, to discuss strategies for implementing what MRA calls “much needed” amendments to the legislation before participating in crucial meetings with parliament on Wednesday, Dec. 7 that could determine the bill’s future.

MRA has been working with hundreds of NGOs year-round in its years of operation, but this meeting was the largest regional gathering that’s been held by the organization. In total, 41 representatives from regionally diverse Moroccan NGOs participated in the mobilization effort. This collaboration of minds highlights the importance of unity among women’s rights activists and civil society groups who want to make sure women who are subjected to violence have the proper resources and support.

Atika El Hamdaoui of the Krazza Association for Rural Development has been working for 6 years on development issues.

“Through our work with various organizations we realize that there is a lot of violence, especially in rural areas, against women. These women are still unaware of the legal status they may enjoy,” El Hamdaoui said.

According to a 2011 national survey of women aged 18 to 65 by the Moroccan High Commission for Planning, 62.8 percent had suffered physical, psychological, sexual, or economic violence. Some 55 percent of these women reported “conjugal” violence while 13.5 percent reported “familial” violence. A mere 3 percent of women who experienced conjugal violence reported it to the authorities.

After being shelved for almost ten years, a new draft of a violence against women law surfaced when Bill 103-13 was adopted by the government on March 17, 2016. After that, the House of Representatives passed it on July 20, sending it to the House of Councillors for final approval.

Critics say that the new bill just isn’t good enough. According to Kouzzi, the bill mainly focuses on minor reforms to the penal code and all but ensures that during criminal and civil proceedings, women are “vulnerable to be victimized again”. Specifically, the draft bill increases punishments for pre-existing offenses and doesn’t stipulate guidelines or give authorities coherent powers to intervene. It also doesn’t acknowledge marital rape or have measures in place to protect victims until investigations into violence claims are completed.

“Current law says ‘there should be witnesses’ [to violence against a woman]. The draft bill didn’t address this. When she submits a complaint, she has to prove she has been subjected to violence. What if it’s psychological violence? How do you prove this?” Kouzzi asked, pointing to the unclear phrasing in the bill. “We want to provide solutions in the form of proposals. Does the bill include mechanisms that will make it implementable? If not it is useless. It is our duty as advocates to interfere while the draft bill is under discussion.”

During the day-long meeting, participants discussed the legal and legislative steps necessary for introducing their reforms as well as strategies to appeal to Councillors. After a lunch break, the women were separated into four groups to form strategic messages and tactics for their Wednesday lobbying campaign. Two groups role-played to prepare for possible interactions with government officials.

After each group presented their conclusions, the floor was opened up so critiques and suggestions could be made to make the methods more convincing. The meeting ended with a rallying cry for advocates to “never give up”.

“The high level of energy of the group, the collaborative collective work spirit to work together towards a common objective and the concrete outcomes of the meeting [were my takeaways]. Everyone committed to doing something very specific. Everyone’s very motivated,” Willman affirmed. “I think we’ve got everyone mobilized and motivated for local level advocacy with their Councillors and for national level advocacy as a group.”