Toronto - During his visit to the White House for the first time under the Trump administration, Israeli Prime Minister Benjamin Netanyahu and US President Donald Trump discussed the long-standing two-state solution. 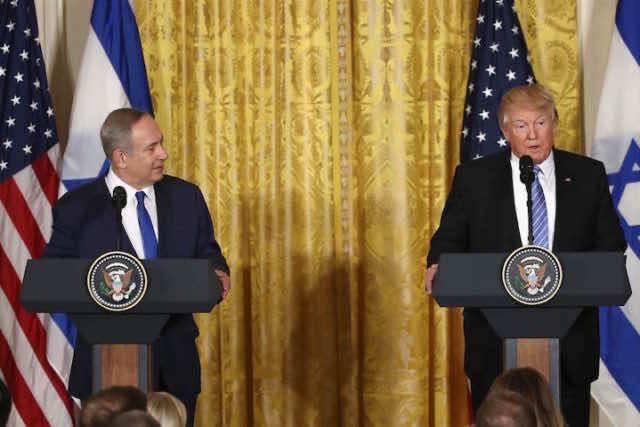 By
Constance Renton
-
Constance graduated from the Television and Radio Broadcasting Program at Canadore College in 1983.
Feb 15, 2017

Toronto – During his visit to the White House for the first time under the Trump administration, Israeli Prime Minister Benjamin Netanyahu and US President Donald Trump discussed the long-standing two-state solution.

Trump announced to reporters during their press conference that he was also open to a one-state solution, according to CNN.

Covered live on major networks, the meeting of two old friends, Trump and Netanyahu, played out like a weekend visit but still managed to hold a few interesting moments.

Approaching their respective podiums, it was difficult not to notice the fraternal glee displayed by both leaders… and it was instantly unnerving. The two went on at length, each in their turn, about their long-standing friendship, almost reveling in the chance to laud each other in front of the world.

Soon things took on a more formal tone and questions began to flow from reporters about Trump’s position on the US’ long history of support for a two-state solution that recognizes the Palestinian State.

If nothing else, President Trump’s remarks on a two-state versus a one-state solution proved he has a firm grasp of the inane. “I’m looking at two-state and one-state and I like the one that both parties like. I’m very happy with the one both parties like,” he said, according to a report from news agency Reuters.

Ultimately, Trump declared himself firmly on the fence, stating he’d be fine with either solution, adding that both parties were going to have to compromise to reach a peace deal. He openly urged Palestinians to recognize the State of Israel but there was no mention of a reciprocal move on the part of Israel toward the State of Palestine.

There were glimmers of sternness like Trump suggesting to Netanyahu, “I’d like to see you pull back on settlements for a bit.” For his part, “Bibi” made no such commitment. It is worth noting that talks have been stalled since 2014.

According to the same Reuters report, critics and observers feel a retreat from a two-state stance would potentially destroy decades of bi-partisan US policy. Senior member of the Palestinian Liberation Organization, Hanan Ashrawi said, “If the Trump administration rejects this policy it would be destroying the chances for peace and undermining American interests, standing and credibility abroad. Accommodating the most extreme elements in Israel and in the White House is no way to make responsible foreign policy.”

The spectre of the US embassy in Israel moving to Jerusalem was also raised by reporters wanting to know if it was still being discussed, according to the BBC. “As far as the embassy moving to Jerusalem,” President Trump said, “I’d love to see that happen. And we’re looking at it very, very strongly. We’re looking at it with a great care, a great care, believe me. And we’ll see what happens.” What followed was a wince heard around the world.