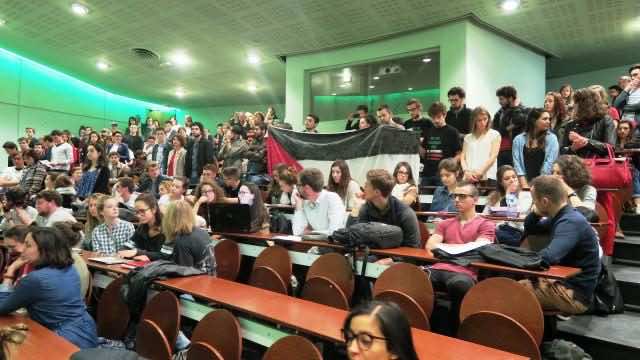 In keeping with international indignation vis-à-vis Israeli violations of international laws and United Nations resolutions regarding the living conditions of Palestinians on the West Bank, the students of Sciences Po Rennes, in France, protested against the presence of the representative of the Israeli government and the Israeli Ambassador in France, Aliza Bin Noun, March 30.

The students chanted “Freedom for Palestine” in unison as soon as the Israeli Ambassador was presented to the audience and given the opportunity to speak.

Video footage uploaded to Facebook the same day shows the students clapping and chanting while waving the Palestinian flag. One minute later, a representative made a speech denouncing the discriminatory policies and practices of Israel against the people of Palestine.

“We, students of Science Po Rennes, declare that we stand firmly against holding this conference.  Aliza Bin Noun was invited to our institution to represent the state of Israel, a colonizer state governed by the extreme right,” said the students’ spokesperson.

The speaker stated that Israel has presented itself as “the only democracy in the Middle East,” while at the same time imposing an apartheid regime on the Palestinians for decades, in total disregard “of the denunciation of the international community.”

The speaker also denounced Israeli pressure exerted on the United Nations this March to delete reports drafted by two Americans who specialize in International law, Richard Falk and Virginia Tilley. The reports were critical of Israel, saying it “is guilty of apartheid policies and practices.”

A third voice condemned the efforts of the Israeli embassy in France to pressure French universities into blocking International Apartheid Week events. The speaker pointed out that anti-apartheid activists received rape and death threats.