Rabat - The Italian-Moroccan Friendship Parliamentary Group held a meeting on Tuesday with Habib El Malki, Speaker of the House of Representatives, and members of the Foreign Affairs Committee, to discuss bilateral parliamentary relations between the two countries and ways to strengthen them further. 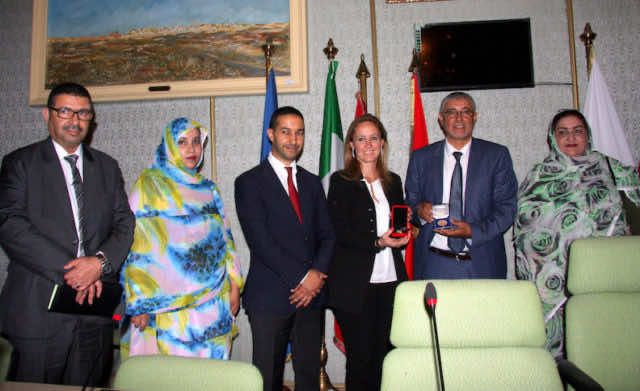 Rabat – The Italian-Moroccan Friendship Parliamentary Group held a meeting on Tuesday with Habib El Malki, Speaker of the House of Representatives, and members of the Foreign Affairs Committee, to discuss bilateral parliamentary relations between the two countries and ways to strengthen them further.

El Malki highlighted the democratic advances Morocco has made with the adoption of the 2011 Constitution, which advocates in particular for advanced regionalization and gender equality, stressing as well the important role the Kingdom plays in the fight against terrorism and illegal migration, strengthening the peace and stability of the Mediterranean.

This meeting also raised the question of the situation of Western Sahara, with El Malki presenting the assertions about the territorial integrity of Morocco, saying that the Moroccan autonomy plan to settle the Sahara issue is considered “serious, realistic and credible by the international community.

For Italian MEP Khalid Chawki, “Morocco is a successful model of democracy and individual and collective rights,” stressing that the visit of the Italian delegation will help to better publicize the Kingdom’s achievements.

The Italian delegation has also met with the minister delegated to the Minister of Foreign Affairs, in charge of Moroccans living abroad and Migration Affairs, Abdelkrim Benatiq, who welcomed the quality of relations between the two countries, stressing the important role the strategy adopted by Morocco plays in advancing the migration and asylum issues.

For the Italian delegation, “the meeting aims to strengthen bilateral cooperation in the fields of immigration and integration and to examine ways to contribute to the development of the Mediterranean through a fruitful economic and cultural exchange,” emphasizing the need to “collaborate on the integration of immigrants through education, culture and good practices, as well as the ratification of the laws and conventions between the two countries on the social file of Moroccan immigrants.”

In a statement to the MAP, Benatiq said that this visit focused on the role played by Moroccans living in Italy in the development of the European country, calling for joint action to find appropriate solutions to the existing difficulties the Moroccan community faces in Italy.

In this context, Benatiq underlined the determination of his department to work for the strengthening of the social and economic ties between the Moroccan diaspora and its country of origin.

Benatiq also highlighted the long way Morocco has came along, from a crossing point to a host country, where several immigrants had chosen to settle, stressing that these communities are in urgent need of social and economic tools to complete their integration into the Moroccan society.

The visit of the delegation of the Italian-Morocco Friendship Parliamentary Group, which took place on May 15-19, also includes meetings with several Moroccan officials in the cities of Rabat, Casablanca and the region of Laayoune-Sakia El Hamra.