Rabat - US Secretary of State, Rex Tillerson, said on Tuesday in Doha that Qatar’s position regarding the ongoing Gulf crisis is “reasonable.” 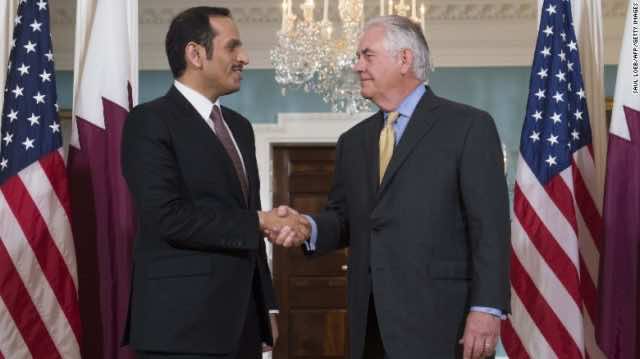 Rabat – US Secretary of State, Rex Tillerson, said on Tuesday in Doha that Qatar’s position regarding the ongoing Gulf crisis is “reasonable.”

Tillerson arrived in Qatar on Tuesday as a part of his four-day trip intended to help rectify the ongoing Gulf Cooperation Council crisis. While in Doha the US and Qatar signed a memorandum which outlines their future plans to fight terrorism.

Saudi Arabia, Egypt, Bahrain, and, the United Arab Emirates cut ties with Qatar on June 5 after accusing the country of “supporting” terrorist groups. Though Qatar has denied the allegations, describing them as “false,” sanctions still remain in place.

On June 22, the Gulf countries agreed to lift sanctions if Qatar adhered to a list of 13 demands which included shutting down Al-Jazeera’s Doha news network, restricting relations with Iran, and cutting ties with terrorist organizations. Qatar however refused the original offer.

Tillerson proceeded to meet with Qatar’s Emir Sheikh Tamim bin Hamad Al-Thani on Tuesday in Doha. The two discussed possible resolutions regarding the GCC crisis. After the meeting, Tillerson told reporters that Qatar’s stance has been “reasonable” in the five-week quarrel and that Qatar “has been quite clear in its positions”.  Tillerson has supported Qatar throughout the crisis.

Moreover RC Hammond, a senior advisor of Tillerson said that the list of demands that was originally presented to Qatar is not possible, however there are individual requests on the list “that could work”. Hammond did not specify which of the points he was referring to.

At the end of the meeting the US and Qatar signed a memorandum that outlines the countries’ futures efforts to combat terrorism and it financing. In a press conference Tillerson said “Together the United States and Qatar will do more to track down funding sources, will do more to collaborate and share information, and will do more to keep the region and our homeland safe”. The Memorandum was announced in a joint press conference held by Qatar’s Foreign Minister Sheikh Mohammed bin Abdulrahman Al Thani and Secretary of State Tillerson.

Sheikh Mohammed however claims that the memorandum is “not related to the recent crisis and the blockade imposed against Qatar.”  Moreover Tillerson reported that they had been discussing the agreement for months.

Tillerson will meet with foreign minsters from Saudi Arabia, Bahrain, Egypt and the United Arab Emirates that spearheaded the bloc on Wednesday in Jeddah.