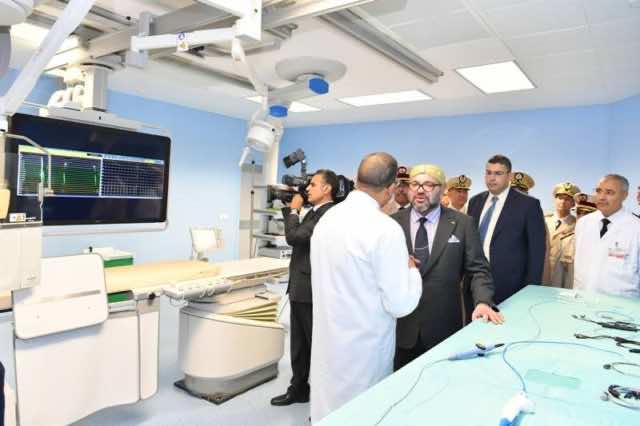 The center is a medical-surgical facility specializing in treating patients with heart disease.

A budget of MAD 324 million was allocated for the establishment of this center, which was built in an area of 3,605 square meters.

The new facility is intended to complement the national healthcare services and reinforce the status of the Mohammed V Military Instruction Hospital as a platform for staff training and cutting-edge medical research.

The center’s design and organization are said to be in line with international standards. It has an accommodation capacity of 120 beds and boasts high-tech equipment, which allows it to provide top-quality medical care and training, said Maghreb Arab Press (MAP).

At his arrival at the hospital, the King was greeted by Major General Abdelfatah Louarak, Inspector General of Royal Armed Forces (FAR), and Brigadier General Abdelkrim Mahmoudi, FAR Health Inspector.

After reviewing an honor detachment from the headquarters’ battalion, the King was greeted by El Houssaine Louardi, Minister of Health, Abdelatif Loudiyi, Minister Delegate in charge for National Defense Administration, Lieutenant-General Hosni Benslimane, Commander of the Royal Gendarmerie and Brigadier General Mohamed Berrid, head of the Third Bureau.