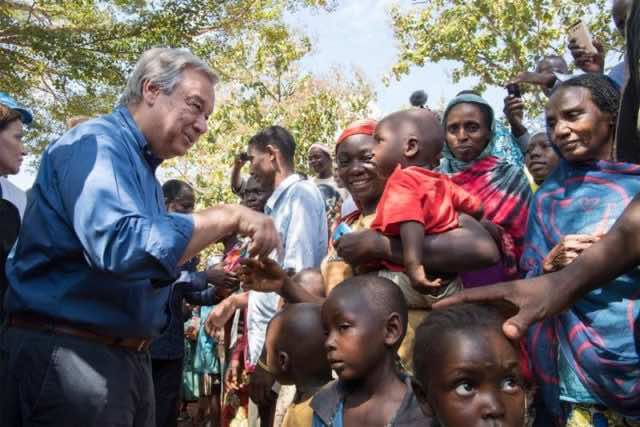 Rabat – During his visit to the Central African Republic, United Nations head Antonio Guterres paid tribute Wednesday, October 25 to Moroccan and Cambodian Blue Helmets, including those who perished during their mission to protect civilians in the country.

The Secretary-General travelled to Bangassou, the local base of the United Nations Multidimensional Integrated Stabilization Mission in the Central African Republic (MINUSCA), where he laid a wreath of flowers to honor Moroccan and Cambodian peacekeepers who died following an attack on their convoy earlier this year, said his spokesman in New York, Farhan Haq.

In his speech, Guterres mourned the death of those soldiers, who he said showed “extraordinary courage” in protecting civilians in one of the most volatile towns in CAR.

“We need to make sure that the world fully appreciates the heroic contributions of peacekeepers protecting civilians, sometimes in extremely difficult circumstances, like the ones we face in the Central African Republic,” said Guterres.

“I had the opportunity to speak to the King of Morocco and to convey to him my condolences to the Moroccan people, and I want to do it here in a direct way to all the colleagues and heroic soldiers who have fallen for the defense of peace,”he added.

Guterres’ visit the previous to the Bangassou base coincided with the United Nations Days, celebrated annually on October 24, during which he paid tribute to to all peacekeepers deployed in the Central African Republic and to those serving in other peacekeeping missions in Africa and around the world.

“I wanted World United Nations Day to be celebrated here in Bangui, with the peacekeeping forces,” said the UN chief.

Nine Moroccan peacekeepers have died in CAR since the establishment of the MINUSCA in 2014, out of a total of 51 casualties.