Rabat - King Mohammed VI and Qatar's Emir Sheikh Tamim Bin Hamad Al Thani held a private meeting on Monday where they discussed the “excellent relations between the two brotherly countries and ways to further deepen cooperation between the countries,” according to Maghreb Arab Press (MAP). 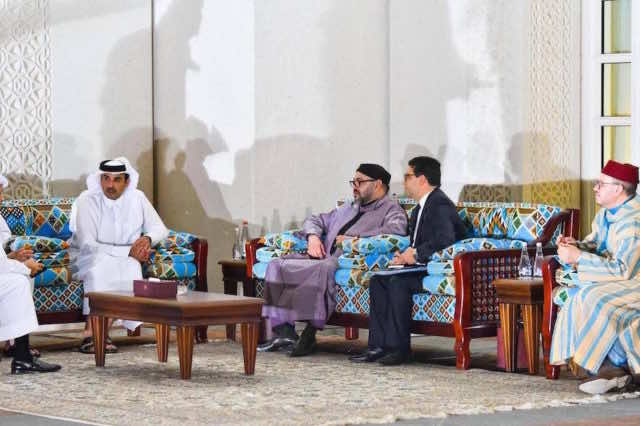 Rabat – King Mohammed VI and Qatar’s Emir Sheikh Tamim Bin Hamad Al Thani held a private meeting on Monday where they discussed the “excellent relations between the two brotherly countries and ways to further deepen cooperation between the countries,” according to Maghreb Arab Press (MAP).

The two heads of state also talked about regional and international topics of common interest.

This is King Mohammed VI’s first visit  in  Qatar since June, when the several Gulf nations severed diplomatic ties with Qatar, triggering a region-wide diplomatic crisis. The ongoing Gulf crisis pits Qatar against a quartet of its neighbours: Saudi Arabia, the United Arab Emirates (UAE), Bahrain, and Egypt.

Before departing for Doha, the Moroccan monarch held a meeting with the United Arab Emirates’ Crown Prince, Sheikh Mohammed bin Zayed Al Nahyan, in Abu Dhabi, where he spent five days as part of an official visit to the UAE.

Morocco has traditionally maintained strong diplomatic, economic, and political ties with the Gulf monarchies. Though the communique issued by the Royal cabinet last Tuesday did not specify whether the King’s visits to Abu Dhabi and the Doha would discuss ways to resolve the Gulf dispute, observers believe that trying to mend the rift between Qatar and its Gulf neighbors is top of King Mohammed’s agenda.