Rabat - Security elements in the southern Moroccan city of Taroudant are taking strict precautionary security measures ahead of a nearby town’s Hiloula, which gathers the world’s Jews every December to celebrate in memory of Rabbi David Ben Baroukh.

Rabat – Security elements in the southern Moroccan city of Taroudant are taking strict precautionary security measures ahead of a nearby town’s Hiloula, which gathers the world’s Jews every December to celebrate in memory of Rabbi David Ben Baroukh.

Morocco’s royal gendarmerie and the authorities of the region and the town of Oulad Berhil are all working together to set barricades in the road leading to the Moussem of the Rabbi for security concerns, according to Moroccan media.

Every third week of December, Taroudant becomes a religious travel destination. Hundreds of Jewish people from around the world, including those of France, England, the US, Tunisia, Iraq, and Venezuela, land in Morocco to celebrate the Moussem of Rabbi Ben Baroukh, in Tinzert, a town in the Taroudant province, a travel agency told Moroccan magazine Telquel Arabic.

Rehabilitation works in the Jewish shrine are underway, as well as the renewal of equipment of accomodation in favor of the guests. Hiloula (also spelled Hilula) has been a holy event for Jewish people for more than 231 years in the town.

The shrine offers 300 rooms for the annual visitors,  who throng together to the Ben Baroukh shrine to celebrate Hiloula festivities, in which they supplicate and recite Jewish religious prayers on the grave of their Rabbi.

In September, hundreds of Moroccan Jews from all over the world gathered in Morocco’s coastal city, Essaouira, to celebrate an annual four-day celebration of Hiloula to pray on the grave of Rabbi Haim Pinto on the anniversary of his death in the city’s Jewish cemetery.

The official ceremony of the event was marked by the presence of Jamal Makhtatar, the provincial governor, and other Moroccan officials. 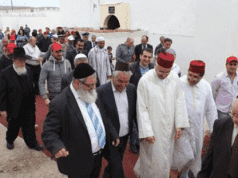 Moroccan Jewish Community Flocks to Essaouira for Hiloula of Pinto 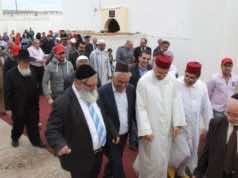