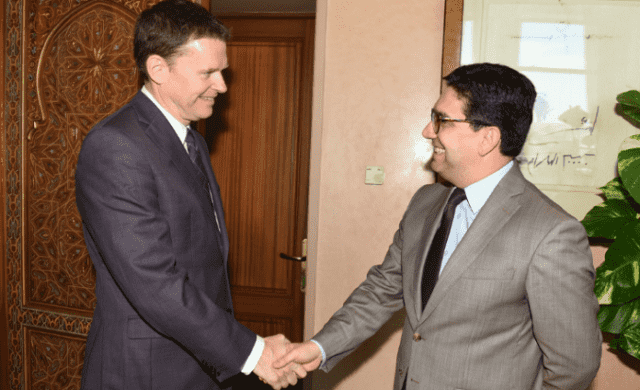 During his Rabat visit, Stewart also met with Morocco’s Minister of Interior, Abdelouafi Laftit, who reiterated Morocco’s warning and formal protest over the Polisario’s repeated illegal operations in the Guerguerat area buffer zone.

During the meeting, Laftit reasserted Morocco’s commitment to support the MINURSO in fulfilling its mandate in the region. The Moroccan official also briefed Stewart about Polisario’s illegal maneuvers that “could undermine peace and security in the region and hinder the negotiation process to reach a lasting solution to end for the disputed region.”

Stewart acknowledged the warm welcome and expressed his desire to work together with Morocco to find a lasting solution. He reiterated his commitment to ensure compliance with military agreements and a rapid return to the status quo in Guerguerat region, in accordance with the January 6, 2018 statement by UN Secretary-General Antonio Guterres.

The Secretary-General called on the parties to ease tensions in the region to avoid further escalation. His statement followed a series of illegal armed operations by Polisario in the region. Members of the separatist group have been blocking trucks registered in Morocco from crossing the Moroccan-Mauritanian border as well as threatening to block the Africa Eco-Rally Participants from traversing the border.

Stewart arrived on December 28 to his office at the Headquarters of the United Nations Mission for the Referendum in Western Sahara, located in Laayoune.