Rabat - The Moroccan and Spanish Professionals Fishermen expressed, in a joint communiqué published yesterday, their disagreement with the conclusions of the EU’s General Council, according to Spanish news agency EFE.

Rabat – The Moroccan and Spanish Professionals Fishermen expressed, in a joint communiqué published yesterday, their disagreement with the conclusions of the EU’s General Council, according to Spanish news agency EFE.

The Morocco-Spain Association of Professional Fishermen issued this communiqué yesterday as a result of recent statements by the EU Justice Court’s advisor Melchior Wathelet who, talking of Western Sahara stated yesterday that the EU should invalidate its fisheries deal with Morocco because “the deal involves disputed coastal territories.”

Wathelet also said that “The fisheries exploitation by the EU of the waters adjacent to Western Sahara established and implemented by the contested acts does not respect the right of the people of Western Sahara to self-determination.”

“The fisheries agreement does not contain the legal safeguards necessary for the fisheries exploitation to be for the benefit of the people of Western Sahara,” he added.

However, fishermen from Morocco and Spain do not agree with what they see as “a political statement that benefits no one”. They jointly protested against this “ungrounded and politically motivated” decision of the EU Justice Court’s advisor.

“This deal guarantees the respect of International law and human rights; and since the opinion of the general council is not binding, we hope that EU Justice Court will adopt a position in support of the deal,” the communiqué also said.

“Moroccan and Spanish fishermen are surprised by the political motivations of this advisor”, their communiqué added. They also called on the UE to favor the renewal of the fisheries deal, which will expire later this year, in July. They urged the UE representatives to guarantee and “preserve the atmosphere of friendly and beneficial relations” that have so far characterized the said deal.

Omar Akouri and Javier Garat, respective representatives of Morocco and Spain in the joint association of Moroccan and Spanish fishermen, said that they are confident that the UE will adopt a position that sustains the long-standing arrangement of peaceful and mutually profitable relations between the UE and Morocco. 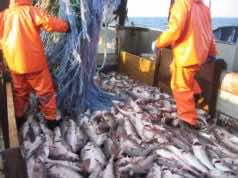