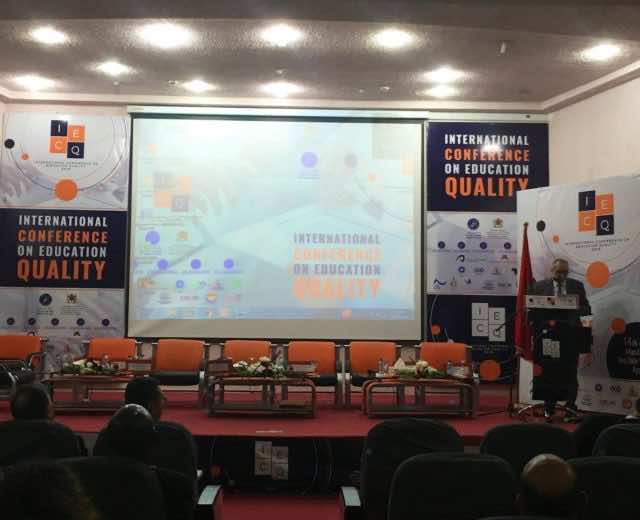 Rabat – The first International Conference on Education Quality launched on Wednesday, March 14, as scholars from 22 different countries convened at Agadir’s Chamber of Commerce.

The conference will last three days and is hosted in partnership with Ibn Zohr University and the Moroccan Ministry of Education, Vocational Training, Higher Education, and Scientific Research.

Before any adults took the stage, several local children put on a brief fashion show, offering the spectators a glimpse into regional Moroccan culture through its traditional clothing, with student “hosts” offering commentary as the others sashayed past.

The seven speakers each reflected the conference’s international scope, addressing the audience in Modern Standard Arabic, French, or English. Indeed, in her opening remarks, Doctor Caroline Jones, who co-chairs the conference and played an integral part in its organization, noted the difficulties she and her colleagues face in navigating so many different languages, cultures, and pedagogical sectors.

However, despite the diversity of perspectives, nationalities, and institutional backgrounds, the conference shares a unifying theme: education quality. Jones declared quality the “common denominator,” not only in terms of expert discourse but also in promoting “multiple and diverse interpretations of quality.”

Conference Chair and University Vice President Abdel Aziz Ben Dou said in his address, “I am very happy to be here and working together in the name of quality education.

“Quality has to do with local factors as well as global factors. We always work in synergy with the local environment.”

To further explore the local environment and the Moroccan educational system, a number of the attendees visited two schools in Agadir earlier in the day.

The conference aims to engage with diverse sectors of education, ranging from early childhood education to the Student Ambassador Scheme (SAS), five of whom spoke at the opening ceremony.

The student ambassadors represented a variety of educational experiences. Some attended Moroccan private schools, others public ones; they studied across Morocco, the United Kingdom, France, and the United States.

Roger Mondou, the Secretary General of the Pan African Institute for Development, congratulated the president of Ibn Zohr University for hosting the event and expressed his hopes for substantive debate during the coming days.

The evening’s keynote speaker, the Secretary General Mohamed Aboussalah, spoke about quality assurance in the domain of Moroccan higher education.

However, quality assurance is not limited to academic discussions. Doctor Caroline Jones reiterated, “Of course [the conference] is about sharing knowledge; that’s why we’re here. But I feel that in this conference, already, we are creating new knowledge, new theoretical positions, and new ideas so that we can move forward. What is the point of having a conference and making presentations if it doesn’t have any impact?”

In his closing remarks, conference co-chair Professor Mostafa Aabi thanked the different advisory committees and scholars involved in putting together the conference, saying “we are very humbled” to host the “world research community.”