Rabat - The head of the Moroccan secret service (DGST), Abdellatif Hammouchi, has received a Moroccan citizen who was assaulted by a police officer to apologize to him.

Rabat – The head of the Moroccan secret service (DGST), Abdellatif Hammouchi, has received a Moroccan citizen who was assaulted by a police officer to apologize to him.

The footage of a police officer’s attack on Khalid Choukri, a scooter driver in Casablanca, sparked a storm of reactions on social media. Some deemed the violence “unacceptable” and “humiliating.”

After quickly reacting by suspending the policeman, Hammouchi welcomed Choukri in Rabat, on Saturday to apologize on behalf of the officer.

“I am extremely happy and honored to have been greeted by Mr. Hammouchi, who apologized on behalf of the security apparatus for the violent behavior I suffered,” Choukri told news outlet 2M.

It is the first time that the head of DGST has received a citizen to apologize, a gesture that was applauded on social media.

The officer, who works at the police headquarters of Casablanca, was not only suspended from his duties, but also referred to the disciplinary council for violating the code of ethics for national security officials, for breaching the duty of reserve, and for exposing an individual to verbal and physical assault.

The video, which circulated on social media Friday, showed an officer slapping and verbally insulting Choukri, who was begging the officer not to seize his scooter.

Choukri even fell on his knees to kiss the officer’s feet while the latter remained completely indifferent. 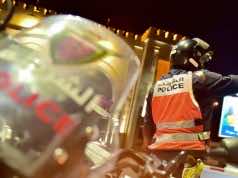