In its 2026 World Cup bid video, “A brief history of Morocco,” Marocopedia traverses time and space to reveal the key aspects of Morocco’s ancient past and dynamic present that make it the ideal 2026 World Cup host country.

As one of the final 30 projects of the #Imagine2026 initiative, the Marocopedia team illustrates Morocco’s ties to antiquity and the present in five “chapters”: prehistory and the earliest humans, the Phoenician and Roman period, the Medieval era, the Colonial period, and modern-day Morocco.

Suddenly, the drum deepens and a strings section sounds ominously as the video cuts to fantastic shots of the remnants of Morocco’s ancient Roman and Phoenician civilizations at Lixus, Banasa, Tamuda, and Volubilis.

The beat picks up again and voices mesh with the sounds of a nai flute as the golden age of Islamic history, the medieval period, takes the spotlight. The screen pans in sweeping air shots over douars in the southern provinces, as men and women are seen performing the traditional Ahaydous singing and dancing with drums, tambourines, and chanting.

Traditional music such as “Tamawayt” and “Bendir” pair with the impeccable Islamic geometry of Al-Karaouine—the oldest university in the world—between flashes of the tunneled medina streets of Fez and the class tbouriga, or Fantasia, horse performances.

The colonial period begins with a musical halt and cuts to delicate colonial architecture, both in the northern Spanish style of Tetouan and the French style that characterizes the central provinces, including Casablanca and Rabat. This period also highlights Morocco’s religious diversity, as church bells and Christian images fuse with shots of Jewish synagogues and mosques and echoes of the Islamic call to prayer.

The present-day begins as the beat drops to a scratching turntable and Tangier’s bustling trade port. Rabat and Casablanca’s unmistakable street art cuts with shots of gnaoua spiritual music concerts and flashes of urban Morocco. Here, the history and culture of the past merge with the exciting development of the present to reveal Morocco’s electric potential to host the football world’s premier tournament.

In a press release, the Marocopedia team shares that this style is meant to “emphasise the journey of the land and its people through the ages progressing to the vibrant and diverse country that Morocco is today…[with] a musical piece that grooves!”

Bringing together cinema, journalism, and audiovisual professionals, the Marocopedia team is committed to the preservation and promotion of Moroccan cultural heritage on the web. After launching in 2015, the Marocopedia website creates and shares compelling high-quality Moroccan content, including mini-documentaries, photography and academic articles.

Above all, the Marocopedia team believe that the creation of an online encyclopedia dedicated to the culture is indispensable for the creative and educational development of present and future generations of Moroccans.

As for the #Imagine2026 competition, the team shares that they are “both excited and humbled to share the privilege of being among the 10 finalists chosen from this incredible group of talented artists and filmmakers.”

“A brief history of Morocco” is ultimately a rare form of collaboration that brings together prominent cultural and institutional actors from around the country: A3 Communication, L’Boulevard Association, The National School of Circus SHEMS’Y, MASEN, SLI PRODUCTION, the Moroccan Ministry of Culture and Communication, and the Ministry of Equipment, Transport, Logistics and Water.

Launched by the president of Morocco’s 2026 bid committee, Moulay-Hafid Elalamy, the #Imagine2026 competition is a citizens’ initiative to highlight Moroccan talent and promote the Moroccan World Cup bid. 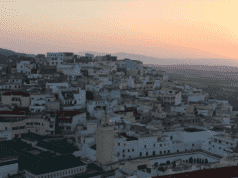