Rabat - After signing a set of bilateral agreements, Morocco and Nigeria have issued a statement saluting the positive ties linking the two countries. 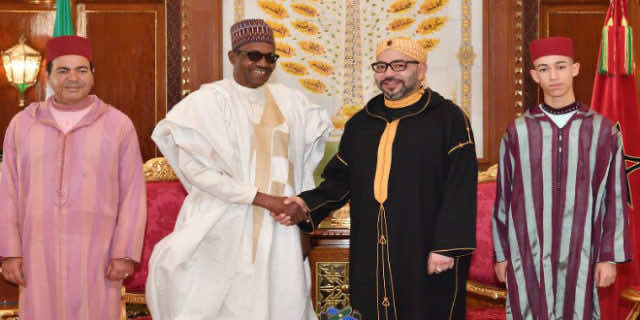 Rabat – After signing a set of bilateral agreements, Morocco and Nigeria have issued a statement saluting the positive ties linking the two countries.

“At the invitation of King Mohammed VI, Muhammadu Buhari, President of the Federal Republic of Nigeria, made an official visit of work and friendship to the Kingdom of Morocco, June 10 and 11, 2018. This is the first visit of a Nigerian head of state in Morocco,” reads the statement.

The joint statement said both African leaders expressed their commitments to creating a model of South-South cooperation.

The leaders expressed satisfaction over progress in agriculture, energy infrastructure, and mining.

They committed to implement the regional gas pipeline, of which a declaration to move to the next phase was signed yesterday at the Royal Palace of Rabat.

Morocco and Nigeria also pointed out significant developments in other areas of bilateral cooperation, as evidenced by the agreement reached between Morocco’s OCP and the Nigerian Sovereign Investment Authority.

The King and Buhari also agreed to enhance partnership in the field of agriculture.

During the visit, the Nigerian President welcomed Morocco’s return to the African Union and congrulated the King for his agenda to address migration issues in Africa.

The King also welcomed Buhari’s leadership in the initiative against terrorism in the Lake Chad region and praised his efforts as the African Union leader in the fight against corruption.

El Othmani described the relationship between Morocco and Nigeria as “historic.”  The head of government said that these relations cover cooperation at all levels, including politics, religion, agriculture, and industry.