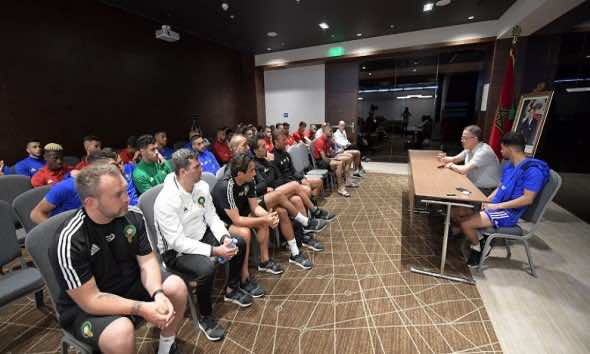 Lekjaa met with the Atlas Lions after their loss against Iran on Friday to encourage the football team to perform well in its upcoming games against Portugal and Spain.

A statement published by FRMF on Saturday quoted Lekjaa emphasizing that “until now, Moroccans have been proud of the performance of the Atlas Lions, whose goal to qualify for the final phase of the World Cup alongside the thirty-two teams after twenty years of absence.”

He added that the presence of thousands of supporters of the national team in Russia “encourages the players to give their best and to forget the defeat.”

The president of the FRMF also encouraged players to give the Moroccan fans “moments of joy and happiness” during the competition.

Lekjaa also reminded the footballers that Moroccan fans were proud to see their team in the final round of the 2018 World Cup in Russia just like they were when the Lions participated in the FIFA World Cup in 1986 and in the “victory against Portugal.”

Lekjaa said that “everyone was aware of the strength of the Atlas Lions’ opponents in this global competition and that losing the first match is not elimination.”

At the end of this meeting, the President of the Federation called on the players to maintain team spirit and believe in their ability to give the best in the tournament.

At the end of this meeting, the President of the Federation asked that the players maintain morale and believe in their ability to do their best.

Morocco plays its next game against Portugal Wednesday, June 20. The third game will be against Spain on June 25.

Morocco’s future rivals, Spain and Portugal, played an excellent game on Friday, finishing with a 3-3 draw.